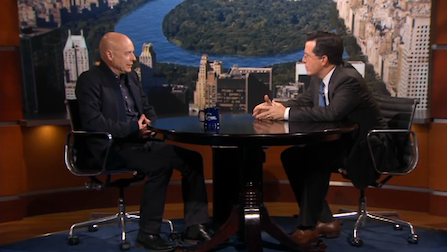 Brian Eno appeared on The Colbert Report last Thursday, November 10. (Watch the episode at colbertnation.com.) It was a peculiar conversation, enjoyable for its peculiarity. It ran through highlights of Eno’s career, but not “the” highlights. With barely a nod to Eno’s most recent and prominent work (the latest Coldplay album, new recordings under his own name), Stephen Colbert focused on subjects that are of concern to an admirer.

One of the pleasures of Colbert’s show is figuring out where his parody of a talk-show host ends and where “he” begins. Complicating matters is that in both modes he likes to poke at the pretensions of his guests. In a way, Colbert’s hardcore fan-ness peeking out from inside his assumed identity makes a good parallel to the video that Eno put together a year ago, the one for which he interviewed himself under the guise of “Dick Flash of Pork Magazine.” Both videos invoke alternate identities, and both involve interviewers who go their own way.

Colbert spent no time spent on U2, but plenty on Roxy Music. (Eno talked about how he knew to quit the band when he found himself thinking about his laundry while performing.) No time on Coldplay, but on the “77 Million Paintings” project, which involves a generative approach to visuals. (Eno estimated it would take 400 million years to view the thing in its entirety, but gave no “guarantee,” as he put it.) As is his strength, Colbert managed to praise the work while providing mild ribbing. After comparing “77 Million Paintings” to a computer screensaver, he asked if flying toasters come across it. He asked about the Long Now project, about the giant clock that is at its heart, the 10,000-year clock, and proceeded to josh: He asked if it has an alarm. Eno reminded him it does have a chime. He asked Eno if he can sing the chime. He then reminded Eno of his work on the Windows 95 chime and asked could he sing that? Eno said he did 83 versions for that project, and he isn’t sure which they used. He said it’s his most popular piece of music ever. That’s a familiar line, as is much of what he said, but the absence of commercial pandering made the reiterated material feel less like he was on rhetorical autopilot (the talk-show-guest equivalent of thinking about the laundry), and more like Colbert was eager to run through the true fan’s greatest hits.

As a measure of Eno’s range, and of Colbert’s, they barely talked about music, and when they did, they talked about singing. (Eno’s growing interest in the human voice is a subject of his recent interview on the Sound Opinions podcast.)

And then they sang. Not immediately, but at the end of the show. They sang “Lean on Me” with Michael Stipe, whose band since 1982, R.E.M., recently announced it was breaking up. Their makeshift trio’s harmony was pretty strong, even if the lyrics got flubbed a little, and at times they weren’t entirely all sure who was leading, if anyone was, if anyone should be. (Perhaps Eno and Colbert were also distracted by the possibility that they were singing with Captain Beefheart, whom Stipe has eerily come to resemble.) They actually did the entire song. The show didn’t fade out midway through, as the viewer might have expected.

Once upon a time, the idea of Stephen Colbert, Brian Eno, and Michael Stipe singing “Lean On Me” on national television would have been surreal. Now it is simply television. Surreal, by the way, is reading the comments that appear on the show’s webpage, where all the subjects of the episode (the Occupy movement, Rick Perry’s inability to recall the name of the Department of Energy, the Eno interview) are tossed around like ingredients that resist coalescing into a salad.

The Eno interview (colbertnation.com) begins with an introduction by Colbert at 9:27.