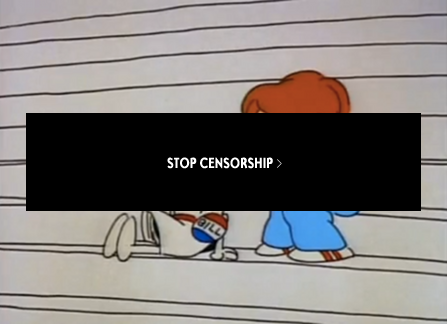 Tomorrow, Wednesday, November 16, is American Censorship Day. For that day — well, starting the evening prior — the logo for this website will be blacked out. The action is part of an effort originating at americancensorship.org to bring attention to the flaws inherent in the Protect IP Act, which is being considered in the United States Senate, and its sibling legislation in the House of Representatives, where similar regulation is called SOPA.

The act would criminalize such an extensive array of uses of copyrighted material that it’s self-evidently too broad to be upheld in court. But the period of time between the bill’s passage and that potential, though certainly not inevitable, court ruling would be a dark age for the Internet, and for free speech.

From a very specific standpoint, this legislation is egregious to this website, because of the site’s longstanding interest in sampling and in the unintended uses of technology and in the longstanding cultural practices that have come to be termed the Creative Commons. But that is, frankly, just the start of the matter.

Here’s a usefully alarming video that summarizes the issues with the PROTECT IP Act:

Also recommended is the New York Times editorial on the subject (“Internet Piracy and How to Stop It”), which acknowledges the impact of piracy, but also points out examples of the “broadness” of the language in the bill:

In one notorious case, a record label demanded that YouTube take down a home video of a toddler jiggling in the kitchen to a tune by Prince, claiming it violated copyright law. Allowing firms to go after a Web site that “facilitates”intellectual property theft might encourage that kind of overreaching — and allow the government to black out a site.

The date of November 16 was decided because that is when the House of Representatives will hold hearings on SOPA (Stop Online Piracy Act), its version of the PROTECT IP Act. Apparently “PROTECT” is a reduction of “Preventing Real Online Threats to Economic Creativity and Theft of Intellectual Property Act of 2011.” If only the ability to craft a nifty acronym aligned with informed legal vision.

The bill is available at senate.gov as a PDF. Please distribute it freely.