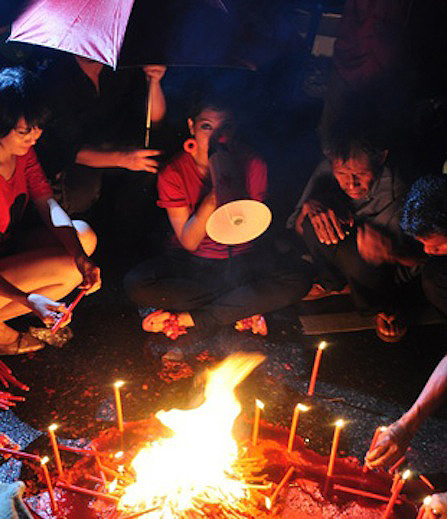 The Triple Canopy site has just concluded its six-episode podcast on the sound of Bangkok. It’s a narrated study of the rhythms and noise, the speech patterns and technology, that define the political sensibility of urban Thailand (MP3). Car horns and megaphones, street-corner Ancient Mariners and thousands-deep crowds, are heard as Ben Tausig, the podcast’s creator, discusses the ongoing governmental transformation of the country, and how those infrastructural transitions play out in the street.

The timing of the podcast, which appeared on the Triple Canopy website at the end of November, clearly aligns well with the rise of the “Occupy” movement, but the correlation isn’t merely a useful coincidence. One needn’t listen too carefully to hear the cry of “We are the 99%” amid the beeping horns and half-broken amplification equipment that comprise much of the podcast.

If any moment stands out from the rest of the excellent episode in a decidedly strong series on the sonics of urbanism, it’s when, toward the end of the recording, that increasingly prominent English-language battle cry is heard to suddenly end, mid-syllable. It’s unclear what has happened: was the speaker unsure of the wording, was a threat sensed in the immediate vicinity, was the recording equipment quickly shut off? The episode is as much about the tenor of protest as it is about the message, but at that moment, the two matters — texture and text — collide in one deeply ambiguous occurrence.

More on the episode at canopycanopycanopy.com. An earlier episode was covered here last year: “Sound, Class, and Sound Clash Over Bangkok.”