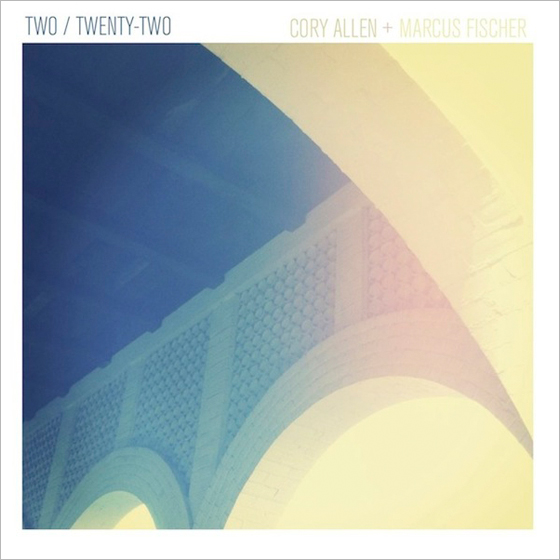 This is a short essay I wrote at the invitation of musicians Cory Allen and Marcus Fischer to accompany their new split single, Two / Twenty Two. The single was released today, February 22, which happens to also be both of their birthdays. In keeping with the theme, the essay has 222 words.

The Internet is a congruity engine. The ceaseless churn of online databases aligns any two or more things found to have in common any one thing.

Congruity is especially powerful regarding individuals with the same birthday. Factors such as seasonal attributes and development relative to classmates are widely accepted to explain perceived similarities between individuals otherwise born years, even centuries, apart.

‘Two / Twenty Two’ by Cory Allen and Marcus Fischer occurred because the two musicians acted on their shared February 22 birthday. Both live in cities considered artistic outposts in otherwise rustic states (Allen: Austin, Texas; Fischer: Portland, Oregon), both have professional experience in visual design, and both explore gentle sonic psychedelics that bring texture to what might otherwise be termed ambient. All coincidence, certainly.

Allen and Fischer stacked the deck in congruity’s favor by providing each other with a set of samples from which to devise new music. The result is two rough fragile recordings. They have the burnish of delicate objects that survived significant tumult. As for the tremulous piano in track two, perhaps it’s a nod to Chopin, who was, according to various databases tracking such things, also born on February 22.

Marc Weidenbaum disquiet.com These are the two tracks:

The split single is a hallowed tradition, but all too often is just an opportunity for two bands to appear together. I remember purchasing the Nirvana / Jesus Lizard single (19 years ago last Wednesday, February 15, an online database tells me) and being disappointed that, well, it was “just two songs”; the subjects of the single’s cover art, a Malcolm Bucknall painting titled “Old Indian and White Poodle,” interacted more than the songs did, in that the poodle puts a hand (hand, not paw) on the shoulder of the Indian. A year later, Mudhoney and Jimmie Dale Gilmore did it right when they covered each other’s songs on a Sub Pop 7″ (18 years ago next Thursday, March 1). Those are just two contrasting examples among many. The beauty of the Allen-Fischer project is that both songs are the efforts of both individuals working together but separately, leaving it to the listener to tease out, to wonder, who did what.

Get the full Two / Twenty Two release, for $2.22, at twotwentytwo.bandcamp.com. More on Allen at cory-allen.com. More on Fischer at mapmap.ch.