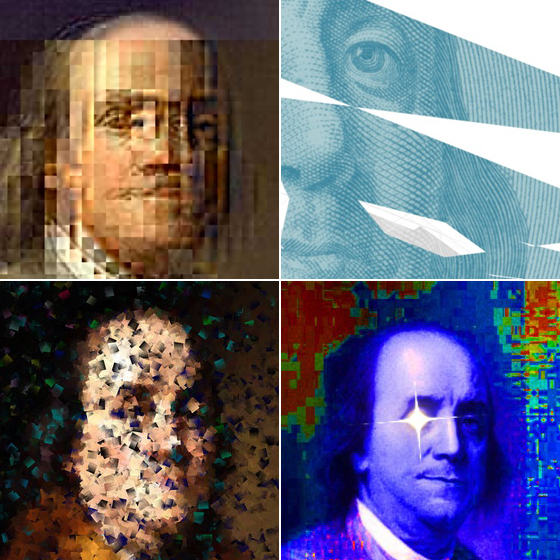 The eighth project in the Junto series was the first to actively employ voices. Voices had appeared in some of the earlier projects, but entirely at the decision of an individual musician. Here, words were the subject.

The assignment was made late in the day on Thursday, February 23, with 11:59pm on the following Monday, February 27, as the deadline. View a search return for all the entries: disquiet0008-voice. As of this writing, there are 51 tracks associated with the tag.

Plan: The eighth Junto project is the first to focus on the human voice. It is a shared-sample project. Everyone will work from roughly the same source material, though there are choices to be made. You will select a single sentence (or extended, self-contained clause) from The Autobiography of Benjamin Franklin. It is Franklin’s own Junto Society that provided the name for our association. You will either extract the single sentence/clause from this public-domain recording of Chapter 11 from the book:

Or you will record your own version of a sentence/clause of your choice (again, as long as it is from Chapter 11). The free text of the autobiography is available here — the link goes directly to the 11th chapter:

Whether you use the provided MP3 or you elect to record a section yourself, you will use that recording as the sole audio source material in your work. You can do with it as you wish — cut it up, slow it down, process it, otherwise transform it — so long as at some point, the sentence/clause is comprehensible to the listener. You will not add any other sounds.

Title/Tag: When adding your track to the Disquiet Junto group on Soundcloud.com, please include the term “disquiet0008-voice”in the title of your track, and as a tag for your track.

Linking: When you post the track, please include this information if you use the MP3:

The underlying vocal sample is from this public-domain recording of The Autobiography of Benjamin Franklin, from LibriVox:

And use this information if you record your own sentence from Franklin’s book:

Text made possible thanks to:

And either way, please include this:

http://soundcloud.com/groups/disquiet-junto Many of the participants opted to use the MP3 from the public domain recording of the autobiography, while some did employ an original recording of the text, and at least one participant uses a text-to-speech software approach. Particularly effective were tracks in which the musicians emphasized the meaning of the spoken text, and several singled out sentences in which the word “Junto” appears (Franklin’s Junto is the society from which our Junto takes its name).

As an additional side benefit of the project, many of the participants saw fit to rework portraits of old Franklin, with particular attention paid to his various likenesses that have adorned the $100 bill. The images up top are just four examples. They originate in tracks by, clockwise, from upper left: Matt Nix, Naotko, Stringbot, and DJ Kaboodle.