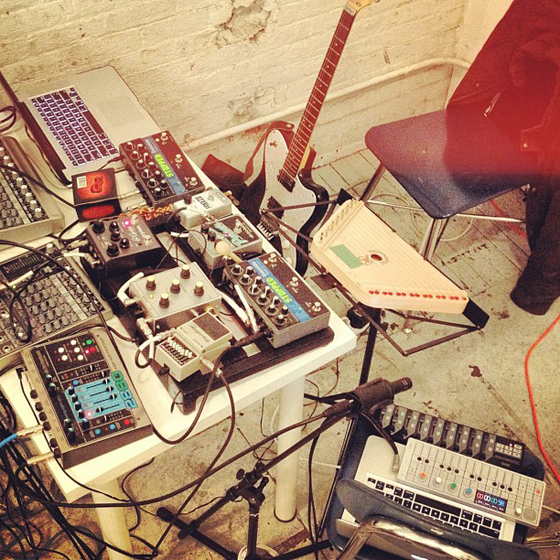 Taylor Deupree and Stephen Vitiello played a concert together earlier this month. If you follow either musician, and anyone who admires ambiguously melodious ambient music should, then you knew this, because they mentioned it on Twitter, and posted photos as they were gearing up, such as the one above. It took place in Brooklyn, and fortunately for those of us not in the area, Vitiello has subsequently posted a six-minute piece from the show. It’s an enticing teaser, a mix of deep, midtempo swells and rough, light textures — and, toward the end, what could be distant screams, like cat calls in a cemetery. The swells seem to consume the textures as much as the textures seem to pierce the swells. The result, until that dramatic turn toward the close, is an expert study in uneasy balance. That closing section, the muted call, lends a kind of retrospective sense of narrative to what had preceded it.

The live recording is from a show at the Presents Gallery in Brooklyn, New York, from a concert organized by John P. Hastings as part of the gallery’s Sound Series. Track originally posted for free download at soundcloud.com/stephenvitiello. More on the event at soundatpresents.tumblr.com. More on the gallery at presentsgallery.net. Vitiello at stephenvitiello.com, Deupree at 12k.com.

One thought on “One Night in Brooklyn (MP3)”