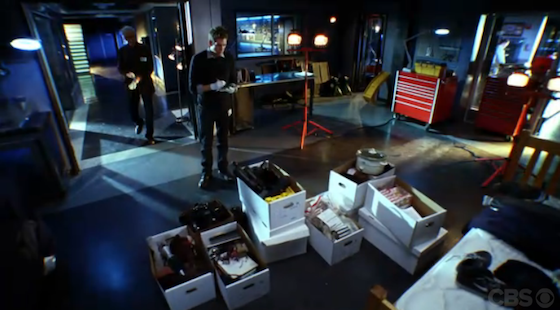 Jargon Watch: Last week I happened to watch an episode of CSI (the “original” series). Titled “Trends with Benefits” it was a foray into the interpersonal impact of surveillance culture, and into the perceived — perhaps the best word is “purported” — generational technological gaps. The key episode-specific character, the dead body around which the narrative circles, was a precocious Las Vegas college student who aspired to the gossip profession (the TMZ enterprise was name-checked). His dorm room was found to be loaded with prosumer technology, including cameras and various other recording devices. One of the CSI staff (the character named Greg Sanders, shown above) observed the collected digital equipment and said of it, “The kid had all kind of electronica.” It’s worth noting that this Sanders character is on the young end of the CSI staff, and was displayed in stark counterpoint to the character played by Ted Danson; Danson’s character isn’t quite sure what “trending” meant in regard to social networks, and he sometimes holds a smartphone like it’s the first time he’s ever been handed a pair of chopsticks. This usage, by Sanders, of the term “electronica” in this manner is interesting, and promising. (The episode’s script is credited to Jack Gutowitz, who according to IMDB.com spent a lot of time on Aaron Sorkin’s West Wing and Studio 60 on the Sunset Strip.) It employs it to describe not a specific and dated subset of popular electronically produced music, but the broader flotsam of general digital-era activity. That is along the lines of the sense in which I use the term, and why I have resisted the urge, over the years, to remove it from this site’s logo.

Speech Jam: Geeta Dayal, author of the 33 1/3 book on Brian Eno’s Another Green World, has taken residence at Wired’s website, which is good news. In one of her first wired.com posts, she covered the “Japanese speech-jamming gun” and smartly highlights precedents ranging from J.G. Ballard to Karlheinz Stockhausen. (Additional coverage at technologyreview.com and io9.com.)

App Updates: These are all iOS, though some if not all also apply to their Android versions. Thicket has added three new modes. NodeBeat has added MIDI support, and expanded the number of savable recordings. Ambiance has added the ability to record sounds and to play sounds in “background” mode, among other things. The eDrops app has added new sounds and the ability to load and save patterns. Audioboo seems to have mostly focused on infrastructure for its latest update. Air has added AirPlay support. Reactable has added access to the community area, “save and view” performances, and more.

Social Bullet: I wrote the following to someone asking for how to “use” “social media” to “promote” their music: “The whole social media thing is complicated. There is no generally applicable answer. I would say the following, broadly: make sure you participate. For example, the Junto project had rules, and to have posted on it without reading the Info page was a matter of not really participating. Make sure if you’re on Twitter and Facebook and SoundCloud that you actively participate: post, reply to other people’s posts, comment on their music. This will, in time, lead to a stronger sense of community. You’re find musicians with whom you have things in common, and you’ll support each other in your pursuits.” (The context was correspondence with someone who had posted a track to the Disquiet Junto project on Soundcloud.com that didn’t have anything to do with the current project.)