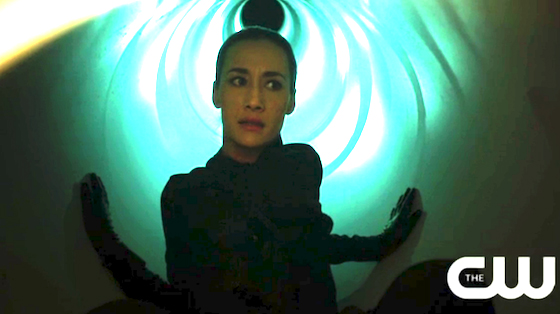 For reasons beyond my comprehension, the time during which I am writing this has become transfixed by the concept of spoilers, which have become something akin to a moral panic in recent years. It’s not unforeseeable that down the road the word will likely have asterisks permanently affixed to it. As I note when necessary over on goodreads.com: I promise that below I don’t “spoil” anything that would have bothered me had I known about it in advance. That said, I cannot think of anything I have read or watched that would have been spoiled had I known the plot-advancing facts beforehand. (Not that it applies here specifically, but my firm belief is that the only real way to “spoil” something is to detail any serious flaws in logic, to the extent that you then can’t get them out of your head as you consume the work.)

The CW series Nikita is at its heart science fiction. Nikita doesn’t have aliens, or sentient computers, or superpowered characters, but it takes place just enough technological moments ahead in the future that it exists apart from the everyday reality of its viewers. And like much science fiction, Nikita has at its heart a spaceship. The key difference is that its spaceship is underground. The spaceship is called Division. It’s an off-the-books government agency that has gone rogue; that rogue status is unbeknownst to most of its members. Division isn’t a spaceship, of course. It’s a paramilitary compound built of concrete, glass, and steel — and decorated with the Design Within Reach catalog.

Like many basic-cable television series, Nikita has a limited budget. And like the more inventive of these series, Nikita makes the most of what it has, especially in terms of its sets. As far as locales are concerned, the show for much of its initial two seasons maintained opposing poles: the desolate if stylish loft where the title character (played by Maggie Q) hid out, and this subterranean organization called Division that is the focus of her vengeful ire. As season two progressed, Nikita’s hideout was abandoned, and as the season came to an end, as it did a week ago, it looked like Division would soon follow.

Having long ago escaped Division and sought to destroy it from outside, Nikita ventures, during the show’s two-part season finale, back into the mothership (the season-ending episode was titled “Homecoming,” with a lack of subtlety that is a trademark of the series). The Nikita viewer has spent much of the show deep inside Division, following the camera’s gaze as it wandered down concrete hallways, hovered over computer banks, and lingered in the offices of the enjoyably malevolent senior management. But Nikita, we come to recognize, hasn’t herself been in Division in a very long time. Brief flashbacks taunt her as she finally re-enters the complex and makes her way toward her target: the scenery-chewing sociopath, played with relish by Xander Berkeley, who runs the place.

Midway through the episode, Nikita pauses while descending an air shaft (pictured above) and says,

“I finally realized what I hate about this place. It’s the hum.”

The hum, clearly, isn’t what she hates about Division. She hates that it carries off routine assassinations, that it puts kill chips in its employees, that it has hijacked American democracy, and that it has stolen the youth of its recruits, herself included. Her comment about the hum is a deadpan joke before a storm of gunfire. And it brings to mind the YouTube videos of another, actual science-fiction starship: the ones showing nothing but the low-level rumble of various generations of the Star Trek Enterprise (see below). These hums are the room tones of fictional places. They are the breath that brings sets to life, that makes the set decorator’s faux concrete seem to reflect sounds like concrete, that makes an ordinary studio feel like it is situated deep below ground.

The look on Nikita’s face at this moment is perfect because it interrupts the illusion cast by the sound design’s hum. She hasn’t just infiltrated the heavily protected edifice; she’s broken the fourth wall as well.