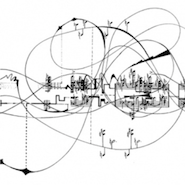 The stretching of music to expose its inner apparatus and its inherent ambient-ness has seen explosive growth this past year, and what’s been lost in the process is the process that goes into these reworkings. While many are, truly, just a matter of easing the pace of the familiar until it takes on the appeal of the exotic, still others wrestle with parts and not just whole; the more adventurous play a more recombinant game with the source material. A case in point is Madelyn Villano‘s exceptional collection Broken Histories, released for free download at brokenhistories.bandcamp.com. In it she explores the mechanisms and textures of music by Mahler, Grieg, Beethoven and others, including such contemporary figures as Glass and Nyman. I will be surprised if this album is not among my favorites when the year is over. Intrigued by what went into the work, I corresponded with her via email, and she gave me permission to post some of her communications, which appear lightly edited here:

I put the mix together as part of an ambient sound installation project for arts week at my school (Reed College), and put up the website so anyone who wanted could download it and use it for studying, or sleeping, or whatever.

I made the tracks over the course of a year mostly as I came into contact with the pieces / recordings. I’m a violin player so I was familiar with some of the composers and their works but most of them I’d heard in film, or chamber performances over that time period. I’d recently become pretty enamored with the ambient artist Celer (youtube.com), whose technological processes and sample sources I’d scavenged for a little bit over the Internet and wanted to learn to emulate (tape and laptop based manipulations that include loop layering, stretch, reverb, and delay that employ multiple levels of recycling: their sample sourcing both choral , string, and piano timbres. Here’s one interview textura.org. Here’s one self-released album in which they further describe process: celer.bandcamp.com.

I used the samples as exercises in Ableton, which I started using around a year and half ago, to try and approximate / emulate the processes they discuss to achieve the quality of suspended & stretched orchestral – acoustic & harmonies from contemporary classical music (they used a field recording of a Samuel Barber choral concert [i’m assuming adagio for strings] for one of their pieces for instance). All the samples were acquired through torrents, youtube, and grooveshark rips, except for the Grieg and the Mahler, the former of which is built from me playing the violin part from the suite played into a dl4 loop pedal and Ableton processing and the latter of which was built from a recording I got from a Chamber Music Northwest performance I attended.

One major focus of the project was the compositional and conceptual possibilities of suspended derivatives vs. direct quotation in sampled music , and decisions concerning manipulated textural transformation vs. exact reproduction. Get the full set for free download at brokenhistories.bandcamp.com. More on Villano, who is based in Portland, Oregon, at madelynsmusic.blogspot.com.