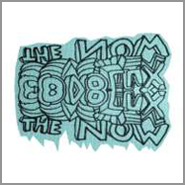 The six tracks that comprise the album The Now by Covolux, released by the 8 Ravens netlabel, are more system than composition — that is to say, they are system-as-composition. The closing track, “Nanglong,” exemplifies the approach, in which a flurry of activity supplants any traditional sense of compositional development (MP3). This is, to be clear, very much in the music’s favor. Each track has a muted hyperactivity to it, like a flock of birds seen only as shadows cast on thick vellum, or a bee hive overheard from below the attic where it has been constructed. The album is listed as “lobit,” or “lowbit,” and this should be seen as a keen distinction from 8-bit. This music may be rudimentary in its sonic palette, but there is nothing purposefully stunted or backward-mindedly retro about it. It’s exploratory and, at times, enthralling.

[audio:http://archive.org/download/8R067/6Covolux-Nanglong.mp3|titles=”Covolus”|artists=Nanglong]
Album posted by the 8 Ravens netlabel for free download at 8ravens.blogspot.com and archive.org. The Now appears to have been the netlabel’s 67th release.