Karriem Riggins Gets Alone Together (MP3)

An instrumental hip-hop taste from the longtime jazz drummer 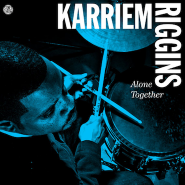 The great Stones Throw record label has shared an MP3 teaser of the debut full-length from longtime sideman and producer Karriem Riggins, whose CV is absurd in its breadth, from support as a drummer to Diana Krall, Mulgrew Miller, and Ray Brown, to production work for the Roots, Slum Village, and Common. Those jazz and hip-hop threads have overlapped at times, notably in his projects with Madlib. The forthcoming Riggins album, Alone Together, will be a set of hip-hop instrumentals. The advance taste is titled “Moogy Foog It,” a bit of downtempo martial-drumming arts, the beat a flangy percussive riff, above which an 8bit snake charm melody noodles around lazily. The track ends quite suddenly, suggesting it will merge with the subsequent song when the full album appears.

More on the release at stonesthrow.com. The notes on the album page are a little confusing, in that they list October 23 as the release date but state “Vinyl and digital will be released in two-parts over summer and fall 2012.” Perhaps this MP3 comprises the “digital” part of that release.

And for additional context, here’s Chet Baker covering the jazz standard, by Arthur Schwartz and Howard Dietz, from which the Riggins album takes its name: