An archival interview from Songs of Faith and Devotion

In early 1993 I traveled to London from Sacramento, California, to interview three quarters of the band Depeche Mode about their forthcoming album, Songs of Faith and Devotion.

A week later I flew to Los Angeles to meet with the final fourth. 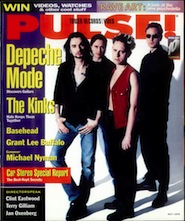 I’ve long meant to post that interview here, but am only just now getting around to it, almost 20 years after the fact, and some 16 years since I launched this site. I was at the time of the interview midway through the seven years I would spend as an editor at Pulse!, the magazine formerly published by Tower Records (magazines, really — there were also Classical Pulse! and epulse). My Depeche Mode article, “Fashion Victims,” was the cover story for the May 1993 issue, which, for context’s sake, also featured interviews with Basehead (on the subject of its sophomore effort), the Kinks (for their final studio album, Phobia), and Michael Nyman (for an Argo Records collection). Adrian Tomine, who was drawing monthly comics for the magazine at the time, published the final section of his three-part “Sleepwalk.”Justin Green’s monthly comic was about disc jockey Alan Freed. Art critic Glen Helfand wrote a survey of rave-flyer art. (I had one other piece in the issue, a little summary of two very different tributes to Louis Armstrong.) It was, in retrospect, a particularly solid edition of the monthly publication. 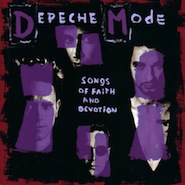 My recollections of the trip to London to interview Depeche Mode are somewhat hazy. According to the brief bio that appears at the end of the article, my arrival in London occurred a week or so after the Tom Phillips retrospective had closed at the Royal Academy, much to my dismay. I stayed at a youth hostel to keep costs down. I remember having a beer at a pub and learning about the emotional toll of the dole by overhearing a father tell his son what “work”was like, based on recollections of what his father had told him before he’d lost his job. Margaret Thatcher had been out of office for barely two years.

I was, at that stage, something of a latecomer to Depeche Mode. I’d bobbed my head to “Just Can’t Get Enough”as a club wallflower, but was already in my listening habits phasing out of songs and toward sound — and to some extent that was the case for the band, too. I came to them via some then-recent Brian Eno remixes, associations to varying degrees of separation with Einstürzende Neubauten, U2, and photographer Anton Corbijn, and a handful of beloved tracks (“Personal Jesus,”“Death’s Door”).

The four members, by my estimation, couldn’t have been more different from each other or from how they appeared on stage. Martin Gore, Depeche Mode’s songwriter, was the most “normal”of the four, by which I mean he was the one with whom having a straightforward, broad-topic conversation came effortlessly. At one point his wife called to consult with him about a bed she was purchasing.

Alan Wilder, essentially the in-house producer, was focused entirely on the production process, which I very much enjoyed discussing at length. Despite the intensity of the record, he was fairly soft-spoken. He talked at length about how sampling and processing were changing the nature of pop-music production.

Andy Fletcher didn’t make a particularly positive impression at first. Despite an agreed-upon schedule, he made me sit and wait while he finished supper at a pub across the street from the Olympic Studios, where the interviews took place. But once the conversation began, he was quite open about how little he contributed musically. That’s not a slight; as the article shows, Fletcher’s role as the band’s in-house manager was essential to its existence and, in retrospect, a model for how bands today, in the post-Internet era, might consider configuring themselves. (Says Fletcher in the piece: “I suppose if we’d just said, ”˜Ask the manager’ all along, we wouldn’t have learned as much as we have.”)

Dave Gahan, the band’s lead singer, was living in Los Angeles at the time. I interviewed him a week later at a hotel near the Capitol Records building in Hollywood. He was sweet, cordial, and reflective, yet exuded an absolutely intense focus. He made constant eye contact to an almost disconcerting degree. I’ve interviewed a lot of people, and I don’t think anyone else comes in a close second to how charismatic he was.

If my conversation with Fletcher was somewhat strained, it may have in part been because I was a tad upset that his dinner delay and some closed-down tube lines (there may have been an IRA threat at the time) were keeping me from getting to a Billy Childish concert across town. I eventually did get there, though. The concert I recall as clearly as I do Gahan’s captivating gaze. I entered the hall through the bar, and as I walked down a long corridor, I heard Childish’s band playing loudly, the Headcoatees singing along in tight nasally bad-girl harmony. Just as I entered the room, the song came to a close and Childish said, “Thank you — and good night,”to much applause. Exhausted from the day, I just stood there and heard myself screaming: “Nooooo!” The entire room quieted and turned toward me and then just as quickly turned back to the stage — and the band proceeded to play another song.

Down the road I may transcribe the full interviews with the four members of Depeche Mode, but for the time being, here’s a time capsule of the group from 1993: “Fashion Victims.”

This post is to announce the appearance of the interview on this site, but for archival purposes the interview itself appears in a separate post backdated to the time when it was first published: May 1993.

One final fun fact: The logo for Disquiet.com is based on a font derived from Depeche Mode’s Violator album cover.