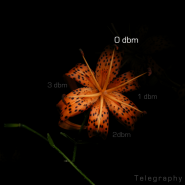 The revivification of the Kikapu netlabel, one of the phenomenon’s oldest, was a welcome turn of events. The label ran from 2001 to 2008 before going for what turned out to be, surprisingly, merely a hiatus. At the time of its closure, it felt more like a true end: the website was replaced with a single archive page, and then eventually the URL went dead. And then last year the RSS feed suddenly sputtered into a functioning state (“Never Delete a Dead RSS Feed”), and since then has been a steady stream of releases. It’s arguable that the latest, 0 dBm by Detroit producer Telegraphy (Richard Sudney), is its strongest. At the most fundamental level, it’s an album that refutes standard netlabel distinctions between rhythm and drone. This is especially the case with the final track on the four-song release, “3 dbm” (MP3), in which the album’s minimal-dubby ventures reach serious fruition, the echoes yielding layers of dankly clanking wonderment.

According to the release’s liner note, the sonic source material was the noisy essence of old tube equipment:

The concept being, combining in real time, audio of shortwave signals from which a vintage vacuum tube communications receiver is used as a back drop for Telegraphy’s minimal dub’ed sound-scapes. This receiver, with it’s etheric property’s not found in today’s solid state electronics, captures outer worldly tonalities and energies. Each track was recorded live directly to a audio capture device with no post production work done. This is to ensure minimal damage to any etherics that were recorded from the howl state vacuum tube radio.