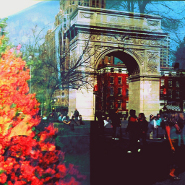 Never delete a dead RSS feed, because you never know when the feed will suddenly show signs of life. Late last year, for example, the great if far-from-prolific netlabel called “yoyo pang” released a single song after an absence longer than a year. And then this past Friday, March 20, the Kikapu netlabel, which called it quits in early 2008 after 109 releases and almost a decade of activity, added release number 110 to its catalog. The Kikapu wesite, at kikapu.com, has long since come into the possession of a domain squatter, but a peek at the Wayback Machine at archive.org displays the final update to the page, which was simply a list of the label’s releases and a reflective quote from Walt Whitman: four lines from “Passage to India,” including the now somewhat clairvoyant “For what is the present, after all, but a growth out of the past?”

The release is Glades Fall, five tracks by Kikapu founder Brad S. Mitchell, who recorded it under the name Pocka. He reports on his own website, bradsmitchell.com, that he had entirely forgotten about it: “I discovered an entire album I recorded a couple of years ago. It was originally a demo for an overseas label, but it never came to fruition beyond this stage in the recording process.” It’s available at his soundcloud.com/pocka and at archive.org. It’s a great collection, especially the elegant backward-masking of “Patient Lines” and the hints of sublimated horn on “Brew Compound Create,” which make one wonder if the sampled material includes Miles Davis.

For future reference, this is the URL of the Kikapu feed: RSS. And here’s a brief interview I did with Mitchell back when he closed down Kikapu in 2008: “End of a Netlabel.”