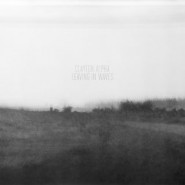 There is an unattributed introduction to Leaving in Waves, Clayton Alpha‘s recent album of gestural ambient-infused music. The collection of 10 tracks is a mix of plaintive low-energy melodic lines, often drawn from what appears to be classical-music source material, and lightly filtered field recordings, the point of origin unclear but the natural elements firm and persistent. The album was released earlier this week for free download by Panda Fuzz, which is a netlabel, which means that it specializes in MP3s. For this reason, the reference to “needle drops” in the following paragraph excerpt from the introduction is largely metaphorical:

Abstract music is just that; abstract. The artist can make suggestions, in titles and artwork, but in the end, the listener holds all the power. Once the needle drops, or the headphones slip on, the creator can only hope that they’ve done their due diligence in getting what they need across, be it as abstract of concrete as they like.

While there are no dropped needles in the process of listening to Leaving in Waves, there appear to have been some in the album’s making. Most of the tracks employ slowed down orchestral cues or languorous piano lines. The sampling occasionally takes on a physical property. Key among the tracks is “A House Out of Reach,” in which the minimalist piano part is rendered weather-beaten by association with the fog bank of field recordings that subsume it (MP3). Furthermore, the part is presented as if on a wobbly turntable, the warped vinyl having an ebb and flow like the surf. [audio:http://archive.org/download/pf035/06-a-house-out-of-reach.mp3|titles=”A House Out of Reach”|artists=Clayton Alpha]
Get the full release of 10 tracks at pandafuzz.com and via archive.org.