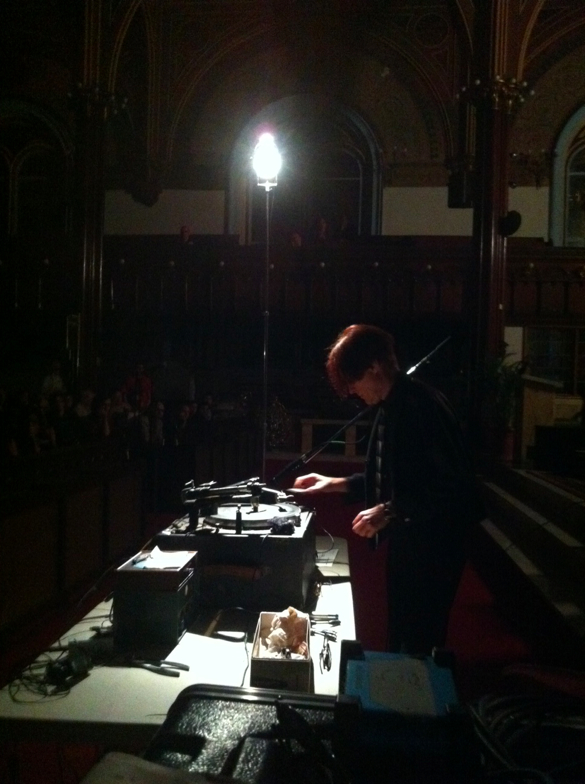 The great Touch Radio podcast has uploaded audio from just a few days ago. The concert in question was a show at Our Lady of Lebanon Cathedral in Brooklyn Heights, New York. Eleh was the headliner, and the opener was Lary 7 (pictured above in a photo of the event from Touch). Charactertistic for the Touch Radio series, there’s close to no information about the event provided. What there is is half an hour of increasingly violent chafing, noises of mechanisms in action, echoed in a reverberant space. Fortunately, a lengthy New York Times review of the Eleh show allowed a parenthetical reference to Lary 7’s opening set: “The opening act was Lary 7, a New York artist who used a lathe-cutter onstage to record the hum and buzz of the machine itself onto a black disc; and then played back the recording with a tonearm. It was process-oriented, less spiritual and much less attractive as sound.” Irritation, it appears, is in the ear of the beholder (MP3).

[audio:http://www.touchshop.org/touchradio/Radio83.mp3|titles=”Live at Our Lady of Lebanon Cathedral (September 2012)”|artists=Lary 7]
The concert was one in a series of events celebrating Touch’s 30th anniversary. Advance word of the show was at issueprojectroom.org. Recording originally posted for free download at touchradio.org.uk. More on Touch’s 30th anniversary at 30.touchmusic.org.uk. Here’s to hoping that the Eleh part of the evening gets a post-concert opportunity for an audience.

One thought on “The Lathe of Brooklyn (MP3)”