The Accrual of Everyday Noise 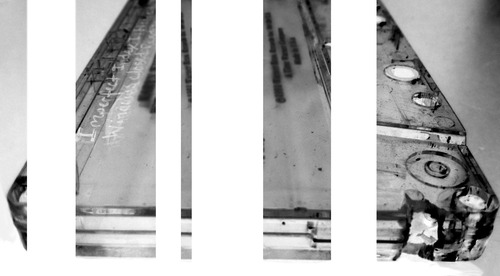 If you accept that memory is a matter of accrual and not of distinct moments, of layers rather than compartments, then the sonic approach employed by Joseph Kramer will have immediate appeal. His Porous Notion: Index Fragments and Interpretations is among the most low-impact of segments heard yet on the superb Radius broadcast/podcast out of Chicago. The Radius series generally emphasizes harsh noises intrinsic to communications systems, but Kramer’s work is most often fragile sounds that filter in and out of focus, leaving the listener to locate chance parallels, chronological interstices, light moire patterns of consonance and incident. Kramer describes the Porous Notion project as follows:

These are private snapshots of home, simultaneously captured on and created by a system consisting of a specialized tape recorder and customized cassettes. This mechanism, typically employed as a performance instrument, both records onto the custom tape and plays it back in turn. The result is a system that makes a record of the sonic space that also reproduces the recording from moments ago while simultaneously recapturing its own output. The system continuously collects new bits of sound that have either originated in the space, passed in through the window or electrical wiring, or leaked into the electronic circuitry of the device. These new sounds join the already recorded sounds in the accumulating sonic image as certain parts of the spectrum are reinforced while others are smeared away.

Track originally posted for free download at theradius.us and soundcloud.com. Kramer lives in Chicago, where he partners with Noé Cuéllar as part Coppice (futurevessel.com/coppice).