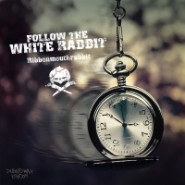 One of the most dependable netlabels is Dusted Wax Kingdom, which regularly releases hip-hop instrumentals that balance old-school aesthetics with the clean aural space provided by digital technology. The music generally takes the form of lounge-oriented jazz source material that’s been cut and spliced into rhythmic, atmospheric goodness. The latest, Ribbonmouthrabbit‘s Follow the White Rabbit, is no exception, and key among its cuts is “Criminal Conspiracy,” its loping beat and cycling rhythm given a bit of narrative oomph from some underworld vocal samples (MP3). Ribbonmouthrabbit is Tamas Toth, who’s based in Miskolc, Hungary. Much of the Dusted Wax output comes from countries once part of the Eastern Bloc. One interesting thing about that geographic concentration is that the musicians can collectively, in some way, be heard to be employing compositional approaches that post-date the fall of the Berlin Wall to, in turn, rework musical material that originated during the Cold War.