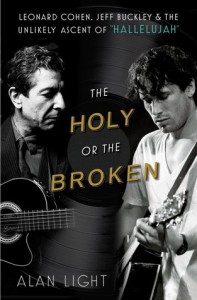 There’s a new book out about the song “Hallelujah,” Alan Light’s The Holy or the Broken: Leonard Cohen, Jeff Buckley, and the Unlikely Ascent of “Hallelujah.” The song was written and initially performed by Leonard Cohen, but it is best known for its other renditions, most notably the late Jeff Buckley’s, itself founded on the arrangement of an earlier version by John Cale of the Velvet Underground. In more recent years, the song has become ubiquitous, appearing regularly in the background of TV dramas and the foreground of singing competitions. As someone currently at work on a book about an album, I was intrigued by the idea of a book simply about a single song. My college alumni magazine asked me to review it (the book’s author is a fellow alum, in fact a classmate). There are many lessons to be taken from the book, key among them something I focus on in the review’s final paragraph:

[S]tudents of the changing role of copyright in our post-Internet age will find much to learn from the song’s ascent. In Light’s informed opinion, it is precisely the absence of a singular, definitive, canonical recording that has left “Hallelujah”up for grabs, free for wide appropriation…

In the piece, I refer to the fans of the song as the “sizable ‘Hallelujah’ chorus.” In an earlier draft, I reserved that inevitable play on words for a different purpose: to consider the collective singers of the song as an asynchronous chorus, each previous rendition echoing in the background of one’s memory as a new version is heard.

The book is recommended reading. My sole misgiving about it is its focus on lyrics at the neglect of music. This is particularly odd for a song whose lyrics include their own note structure — “It goes like this / The fourth, the fifth / The minor fall, the major lift” —Â and is all the more ironic, given that the song includes this line: “but you don’t really care for music, do you?”

Read the full review: “The Song, Not the Singer”

One thought on “The Song, Not the Singer”