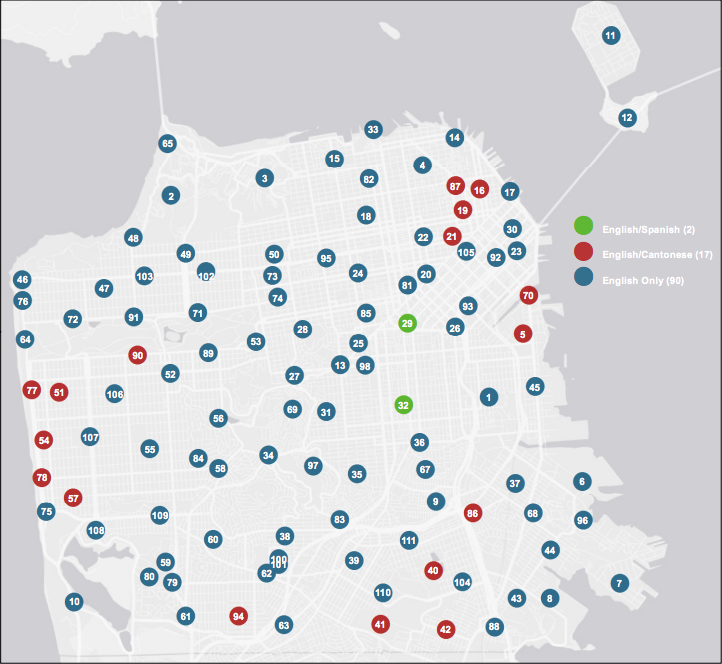 Every Tuesday at noon the Outdoor Public Warning System (OPWS) rings out around San Francisco. It has two stages. First there is a siren. Second there is a spoken announcement: “This is a test. This is a test of the outdoor warning system. This is only a test.”

As of October 2012, there are 111 speakers set up throughout San Francisco to broadcast the message. The majority have the message in English, but there are 2 in Cantonese and English and 17 in Spanish and English. See the above image for a map of the OPWS speakers.

Because of the city’s famously hilly terrain, as well as the speed at which sound travels, and the apparently inexact timing of the system’s triggers, the sirens and announcement can often be heard to overlap, creating an artificial echo effect in addition to the actual echo. Also, because it rings at noon, the sound of the warning often overlays with another form of announcement: the bells of churches and other institutions.

I made this recording on Tuesday, February 26, 2013, in the backyard of my home in the Richmond District of San Francisco. This was an especially clear day. It was made on an H4n, recorded directly to a WAV file. At five of the hour I placed the H4n in the backyard and set it to record. Only after the announcement had fully trailed off and been replaced by the bird song and church bells did I approach the H4n and turn it off. Then I trimmed the length of the recording to focus on the runtime of the OPWS.

And has happens occasionally in the wonderful world that is SoundCloud.com, someone shortly after the posting of the recording made their own remix of it. This is by rawore, aka Bob Phillips of Portland, Oregon:

More on the OPWS system at the website of the City and County of San Francisco Department of Emergency Management: sfdem.org.