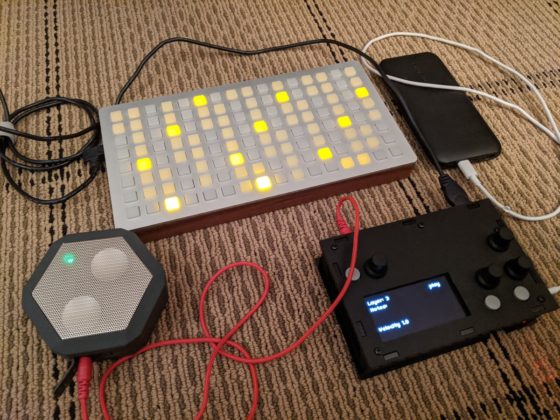 The sun’s down, and the city is quiet. Quieter than usual, for obvious reasons. Hunkered down, you find online connections more important than usual. You download the alpha version of a new piece of audio software, install it, and take on the quiet, a few looped notes at a time.

I started taking weekly guitar lessons a couple years ago, despite which I haven’t been good about tracking my experience much here, even though I spend a chunk of my time sending my guitar through my synthesizer.

This is my second weeklybeats.com/disquiet track of the year. There’s noise in this recording that wasn’t intended, but such is the learning process, especially when you leave the recording to the last minute. Building on last week’s track, I made separate recordings of each of the three notes of two simple chords that shared one note between them. I wanted to have the effect of the piece slowly moving from the first chord to the second and back to the first, where the chords are as much their separate constituent parts as they are functioning chords. The chords are F/D/A and G/D/A#, the D slightly different between the two (I changed with pickup I used). The notes go from my electric guitar into my synth, which captures a grain in the Clouds module (actually the Antumbra Smog), let run for about 20 seconds each. I triggered the granular freeze in Clouds with a foot pedal via my Monome Walk module, which is handy, so to speak, when both hands are on your guitar. Each note is being muffled a bit after it comes out of Clouds. I put it through the Make Noise FXDf (fixed filter) and sent the lowest four bands of the spectrum into my mixer, and one of those is made slightly warbly courtesy of a sine wave from my Xaoc Batumi module that is being squished by my WMD S.P.O. module. I recorded and assembled this in Audacity on my laptop, using noise reduction and volume adjustment as part of the process. Oh, and the guitar goes through a reverb pedal, the Hardwire RV-7, before going into the synth.

Here’s a photo of the patch: 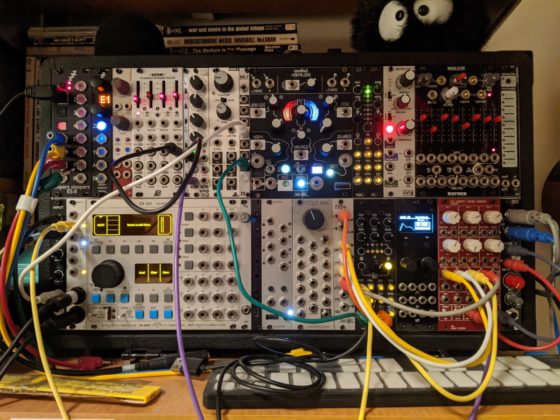 It’s a new year, and I’m giving weeklybeats.com a go again. I only posted a few tracks two years ago when I last joined in. Unlike many other weekly music communities online, Weekly Beats is quite open-ended: “The objective of Weeklybeats is to encourage musicians to be productive, creative, and have fun,” states its FAQ. By contrast, in the SB Beat Battles, everyone works with the same shared samples. In the Naviar Haiku, everyone works from the same short poem as inspiration. And in the Disquiet Junto, everyone follows the same instructions for a different project.

In my brief Weekly Beats writeup, this is how I described what’s going on: “A drone in and near C for the start of the new year. The source note is from my Arturia MicroBrute. It goes through a reverb pedal, the HardWire RV-7, which then goes into my Eurorack modular synthesizer. Several things happen then: three separate bands of the spectrum (via the MakeNoise FXDf module) are individually combined with snippets being frozen in the Clouds module (triggered by a square wave from an oscillator, the Dixie II), and I’m manually saving and playing loops using the Soundmachines UL1 (recording and playing as triggered by two foot pedals via the Monome Walk module). That’s a broad-strokes description.”

Here’s a photo of the patch in my modular synth: 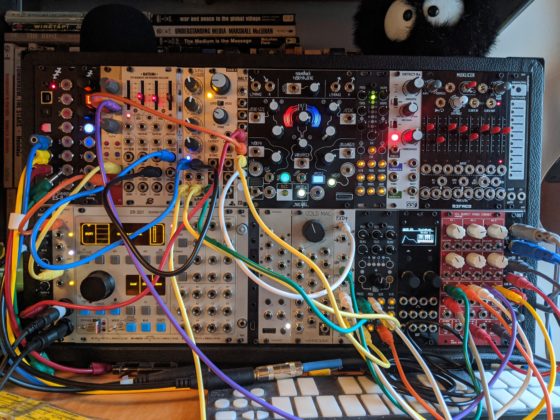 Just a few more notes: Where it says Clouds above, it’s actually Smog, a smaller version of the Clouds module. There’s some low-level LFO activity going on, as well. Waves from my Batumi, squashed into something less wildly fluctuating by my WMD S.P.O., are influencing the volume of one of the FXDf, and the “position” and “texture” of the Smog audio. One thing I was trying to do throughout was ever so slightly alter the tuning of the audio being replayed by the UL1 looper, the idea being to have something close to C that would create moire/beading with the C itself. I was using a lot of the various options within the MicroBrute to make the C as complex as I could, and I slowly turned all of those knobs down at the very end, until the track was silent. That about covers it.

The track is on both weeklybeats.com and soundcloud.com.

The soap-opera narrative of my modular synthesizer diary is me breaking up with and then getting back together again with my Soundmachines UL1 module. I think we finally committed to a long-time engagement last night. Season-ending episode.

This evening, to celebrate the 24-hour-versay of our vows, I ran a slow arpeggio of a series of electric guitar chords through the UL1, and through four other processing units.

Here’s more technical detail, as part of my modular diary, mostly for my own memory: All five of these separate processings of the guitar play simultaneously, though two are being gated, meaning you don’t hear them consistently. The UL1 is a lofi looper, and it’s the thing here being pushed into glitch territory. The UL1 is receiving a narrow, high-end band of the guitar signal, as filtered by the Make Noise FXDf. Another narrow band, also on the high end, is going from the FXDf straight out. A third narrow band, the highest of the trio, is going into a slowly clocked Befaco Muxlicer, the relative volume of the signal changing with each pulse. That same pulse is determining whether a fourth channel, the guitar through the Make Noise Erbe-Verb reverb module, is to be heard or not (as clocked by a slow square wave on a Batumi). That Erbe-Verbe is also having its algorithm flipped into reverse, on occasion, based on the same clocked pulse, but the gate delayed a bit (thanks to the Hemispheres firmware running on an Ornament and Crime module). And finally, the guitar is running through Clouds, a granular synthesis module, which is also being clocked to occasionally snag a bit of the guitar signal and turn it into a haze.

It took awhile to get the chords right. The only note the four chords have in common is an open D. The piece fades in with the D played on two strings, setting the backing tone. It also took awhile to get the right processing decisions made. I started with the UL1, and then built up and adjusted from there. I’m working on having more randomness in the triggering of the UL1, but this is pretty good, far as it goes.

It sounds a bit “Octopus’s Garden,” so it’s titled “Tako Friday” (tako being Japanese for octopus, and this being Friday). In retrospect I hear a bit of “The Dark Side of the Moon” in there, too. The audio was recorded through a Mackie mixer into a Zoom H4n, and then trimmed and given a fade in and fade out in Adobe Audition.