This is a quick, initial attempt on my part with a new piece of software called Ultomaton. The name is a play on the word “automaton” because the software employs Conway’s Game of Life, the famed “cellular automation” simulation, as a source of triggers and other controls, such as volume and place in the stereo spectrum, for all manner of sonic processes. These effects include stutter, backwards audio, looping, and granular synthesis, several of which are heard in this test run.

What I’m playing on electric guitar as the source audio is the first of the 120 right-hand exercises by composer Mauro Giuliani (1781 – 1829). I’ve been working my way through these exercises for the past few weeks, and sometimes experimenting with ways to make practice even more enjoyable, such as prerecording the chords to supply accompaniment. The real-time processing of Ultomaton provides accompaniment as I play, built from the very things I am playing at that moment. The accompanying screenshot shows the Ultomaton controls as they were set for this recording. 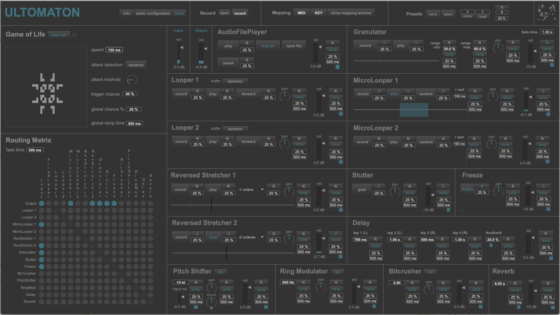 The electric guitar went into the laptop, a Macbook Air (2013), via a Scarlett audio interface. After recorded, the audio was cleaned up in Adobe Audition: volume increased, bit of reverb added, and fade-in/fade-out implemented.