The short version of the process: I recorded my breath (something closer to a breathy vowel), then cut it up into slivers, then enacted some alterations on those individual slivers, then triggered them, then recorded a second variation triggered differently, then combined the two tracks by overlaying them, and then uploaded.

This is part of the current Disquiet Junto project (number 0384), in which we find rhythmic material in our breathing. When working with the sample-triggering, I set the pace of this to 60bpm, which is sort of my happy pace. I didn’t think of the start of each breath as the pace, but instead various moments within the breath.

For more detail, here are the iPad apps I used: I recorded the breathy vowel into AudioShare. It took several tries to get the quality I was looking for. The iPad’s microphone turned most of the initial breath attempts into harshly serrated white noise, which is when I added a vowel/hum quality to the breath, and that took the edge off it. I transferred the sample from AudioShare to ReSlice, and then I used ReSlice to break it down into evenly divided segments, and then changed the attack, decay, and release on those slices, in order that each had a unique quality (I also set two of them to play in reverse). 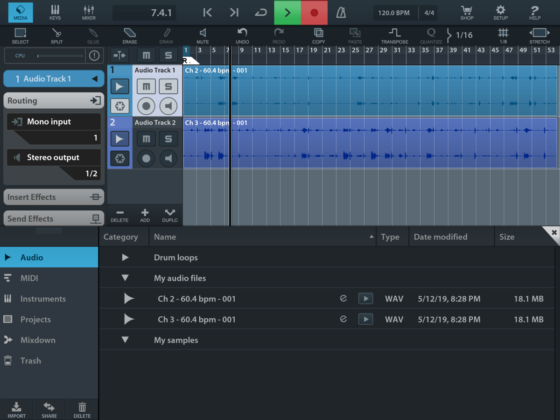 I used the Autony app to trigger the slices in ReSlice for one track, and then added more randomness within Autony to a second round of triggers, yielding a second track of equal length. I could have done those two tracks separately and added them together after the fact, but I wanted to hear what they sounded like together, so I did this all in the AUM app. When I was happy with the balance between the two Autony-triggered ReSlices, I transferred the two lines to the Cubasis 2 app, then used the mixdown tool within Cubasis to output a finished mix. Then I sent that back to AudioShare, and used AudioShare to upload to my SoundCloud account.

More on this 384th weekly Disquiet Junto project — Breath Beat / The Assignment: Explore breath as a resource for rhythm — at:

Image associated with this project adapted (cropped, colors changed, text added, cut’n’paste) thanks to a Creative Commons license from a photo credited to Victor Morell Perez: