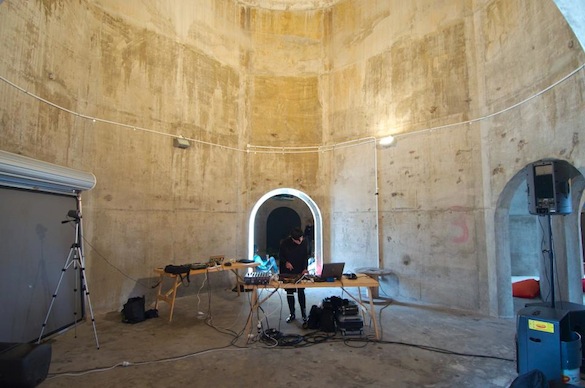 Asked about a perceived “thickness” to the soundtrack of his film Eraserhead, the director David Lynch responded to his interviewer, Chris Rodley, as follows: “I’m real fascinated by presences — what you call ”˜room tone.’ It’s the sound that you hear when there’s silence, in between words or sentences. It’s a tricky thing, because in this seemingly kind of quiet sound, some feelings can be brought in, and a certain kind of picture of a bigger world can be made. And all those things are important to make that world.”

The New Zealand”“based sound artist Jo Burzynska explores the nature of room tone by taking the sounds inherent in the room and playing them back in the room, listening to how the space responds to its own space-ness, how an echo echoes. She recognizes the perceived silence as a misperception, and the result of her efforts is a kind of feedback loop, a sonic tesseract. Under the name Stanier Black-Five, she performed this investigation of space at Silo 6, a highly reverberant location, pictured above, in Auckland as part of the Audio Foundation’s Now! Here! Festival back in December of last year. The excellent Touch Radio series has now posted it online. “All the reverb is natural. No effects were used,” reads an accompanying note (MP3). This is the sound of silence daring the listener to call it silence.

Track originally posted for free download at touchradio.org.uk. The audio was recorded by David Hornblow, the live sound was overseen by Shaun Collins, and Malcolm Riddoch was responsible for the mastering. More from Burzynska at her stanierblackfive.com website. Above photo by David Cowlard. The David Lynch quote is from the book Lynch on Lynch, published by Faber and Faber.