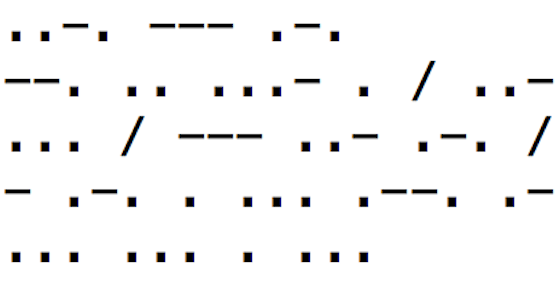 Part of the underlying strength of the spoken word, of the word intended to be spoken even more than of the word intended to be read, is its rhythm. The pace of words, of syllables, of phrases, the criss-crossing of reference points, is as much a matter of rhetoric as are the words themselves: grammar, metaphor, anecdote, even the message may not be as powerful as the rhythm with which they are expressed. Alan Morse Davies pushes at this a bit in his tidy seasonal sonic experiment, in which he took one of the most recited texts and converted it, so to speak, into Morse Code:

What has been encoded is The Lord’s Prayer, and the endeavor is titled, by the ever wry Davies, “How to Contact God When He’s Out of Cellphone Range” (MP3). Additional recommendation, according to Davies: “Use a good ground wire and a good length antenna.” Needless to say, when you make experimental music of the electronic sort, and when your middle name is synonymous with a particularly outmoded proto-codec, it is inevitable that you would employ it in your work. It is fascinating to listen to something hallowed be translated into a technology, a language of sorts, that itself has an aura of antiquity.