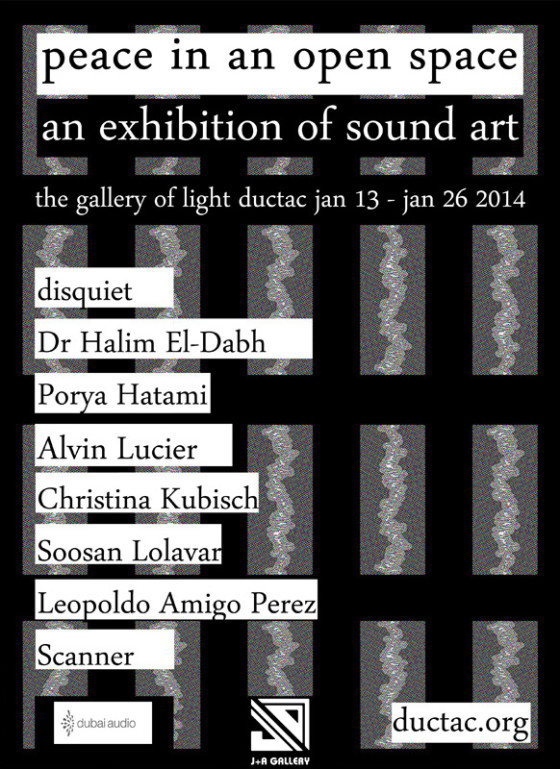 The Dubai-based Gallery of Light, part of DUCTAC, the Dubai Community Theatre and Arts Centre, is hosting a sound art exhibit this month, January 2014. The curator, Simon Coates, invited me to participate.

Artists featured include the British musician Scanner and the early musique concrÃ¨te figure Dr. Halim El-Dabh, as well as Porya Hatami (Sanandaj, Iran), the British-Iranian Soosan Lolavar, Leopoldo Amigo Perez (among his works is a recreation of Arseny Avraamov’s 1922 “Symphony of Factory Sirens”), and Christina Kubisch (Germany). The exhibit will also include an installation of Alvin Lucier’s “I Am Sitting in a Room,” with Lucier’s approval.

For my part, Coates requested that I hand write a list of 10 recommended works of sound art, the intended reader being someone somewhat new to the subject. His concept was to then print the piece large scale and hang it in the Gallery of Light, along with the other exhibited work. I expanded on his idea a little, and fleshed out the 10 recommendations with brief descriptions, plus an opening and closing statement. The title of it is simply “10 Recommended Works of Sound in Art.” Here’s what it will look like from across the room (click it and you’ll see the thing at a more legible scale): 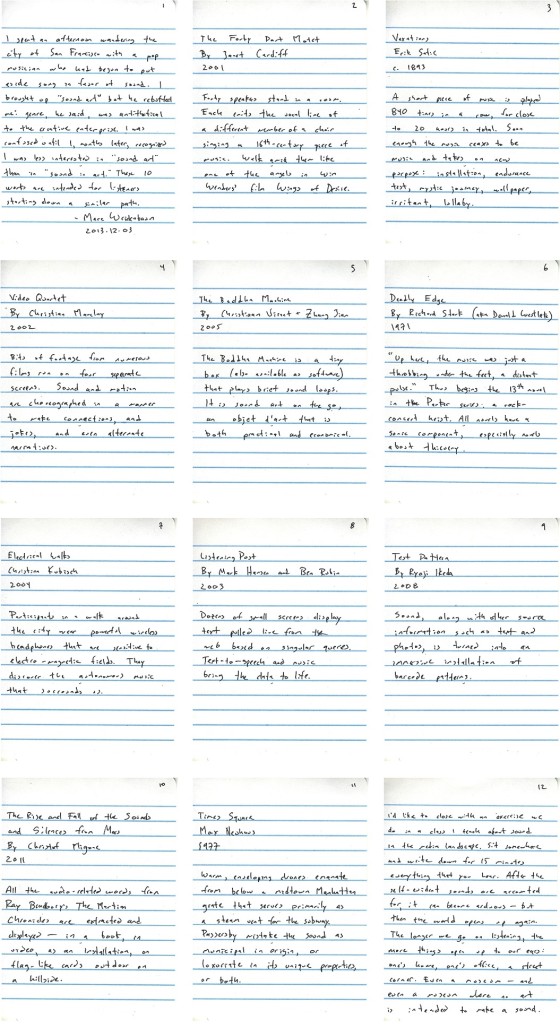 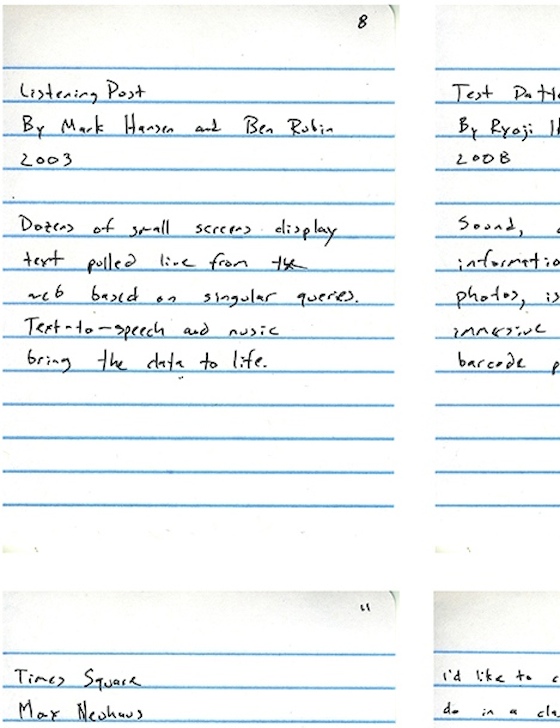 And here’s the text, along with correlating YouTube videos. The videos aren’t in the exhibit, just in this post.

“10 Recommended Works of Sound in Art”

I spent an afternoon once wandering the city of San Francisco with a pop musician who had begun to put aside song in favor of sound. I brought up “sound art” but he rebuffed me: genre, he said, was antithetical to the creative enterprise. I was confused until I, months later, recognized I was less interested in “sound art” than in “sound in art.” These 10 works are intended for listeners starting down a similar path. Marc Weidenbaum 2013.12.03

. . .
1. The Forty Part Motet
By Janet Cardiff
2001 Forty speakers stand in a room. Each emits the vocal line of a different member of a choir singing a 16th-century piece of music. Walk amid them like one of the angels in Wim Wenders’ film Wings of Desire.
. . .
2. Vexations
By Erik Satie
c. 1893 A short piece of music is played 840 times in a row, for close to 20 hours. Soon enough the music ceases to be music and takes on new purpose: installation, endurance test, mystic journey, wallpaper, irritant, lullaby.
. . .
3. Video Quartet
By Christian Marclay
2002 Bits of footage from numerous films run on four separate screens. Sound and motion are choreographed in a manner to make connections, and jokes, and even alternate narratives.
. . .
4. The Buddha Machine
By Christiaan Virant + Zhang Jian
2005 The Buddha Machine is a tiny box (also available as software) that plays brief sound loops. It is sound art on the go, an objet d’art that is practical and economical.
. . .
5. Deadly Edge
By Richard Stark (aka Donald Westlake)
1971 “Up here, the music was just a throbbing under the feet, a distant pulse.”Thus begins the 13th novel in the Parker series: a rock-concert heist. All novels have a sonic component, especially novels about thievery.
. . .
6. Electrical Walks
By Christina Kubisch
2004 Participants in a walk around the city wear powerful wireless headphones that are sensitive to electro-magnetic fields. They discover the autonomous music that surrounds us.
. . .
7. Listening Post
By Mark Hansen and Ben Rubin
2003 Dozens of small screens display text pulled live from the web based on singular queries. Text-to-speech and music bring the data to life.
. . .
8. Test Pattern
By Ryoji Ikeda
2008 Sound, along with other source information such as text and photos, is turned into an immersive installation of barcode patterns.
. . .
9. The Rise and Fall of the Sounds and Silences from Mars
By Christof Migone
2011 All the audio-related words from Ray Bradbury’s The Martian Chronicles are extracted and displayed — in a book, in video, as an installation, on flag-like cards outdoors on a hillside.
. . .
10. Times Square
By Max Neuhaus
1977 Warm, enveloping drones emanate from below a midtown Manhattan grate that serves primarily as a steam vent for the subway. Passersby mistake the sound as municipal in origin, or luxuriate in its unique properties, or both.
. . .

I’d like to close with an exercise we do in a class I teach about sound in the media landscape. Sit somewhere and write down for 15 minutes everything that you hear. After the self-evident sounds are accounted for, it can become arduous — but then the world opens up again. The longer we go on listening, the more things open up to our ears: one’s home, one’s office, a street corner. Even a museum — and even a museum where no art is intended to make a sound.

Update (2014.01.08): Here’s a shot from the curator, Coates, of the individual notebook pages, each of which has been enlarged to the size of an A2 piece of paper. They’ll be hung shortly: 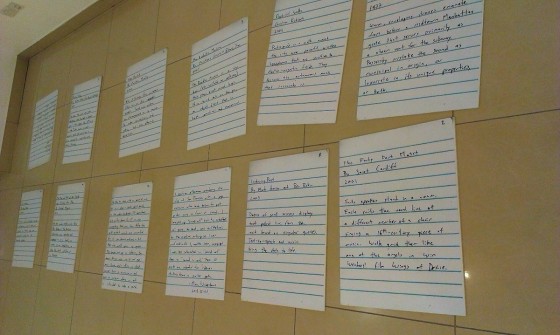 More on the exhibit at Coates’ facebook.com page and at ductac.org/art.php. Coates’ home on the Internet is at simoncoates.com. Special thanks to Holly Leach of Albertson Design for the assistance with scanning.