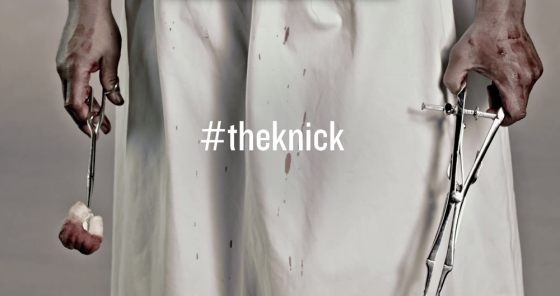 As @compactrobot put it succinctly on Twitter, what works especially well for Cliff Martinez’s score to The Knick is that it’s a “nice choice to go with electronics for a period drama.” In many ways, the use of Martinez’s pulsing, blippy sounds to accompany a story about the dawn of modern surgery, set in New York City in the year 1900, connects the innovations to the past to the data-driven efficiencies of the present. In a way, it’s the reverse of Sherlock, in which the emphasis on string instruments in the score connect the contemporary Holmes story to the original character. Milan Records, which is releasing the score to the first season, has posted three tracks. They’re more in the Tangerine Dreamy style of Martinez’s work on Contagion and Drive than the in the ambient mode of his sex, lies, and videotape and Solaris. Steven Soderbergh, who directed all those films with the exception of Drive, is the creative force behind The Knick.

In an interview with Adam Bryant at tvguide.com, Martinez explains how a particular aspect of his style made its way into this period piece:

“The most important thing that Steven usually does that outlines the approach is that he sends me a rough cut of the picture. The big curveball in The Knick was that temporary music [he used] as he was editing — he was using my music from Drive and Contagion and Spring Breakers, which was a surprise because it didn’t acknowledge the period whatsoever. In fact, it kind of went in the opposite direction,” Martinez tells TVGuide.com. “At first it seemed like a risk because the whole idea of the show was to try to put the viewer in 1900 in New York and everything was pulling in that direction except for the music. I had a phone call with Steven and then I just said, ‘Are you sure you want to do this?’ He said, ‘Yeah. It’s going to be all electronic. It’s going to be modern. That’s intentional.’ And after a few weeks, it had become the sound of the show.”