Another welcome addition to the SoundCloud interface: shuffle play. Just last week I noted the appearance of the ability to repeat a single track. At least since the Instagr/am/bient compilation album was posted back in late 2011, I have hoped for a shuffle option on SoundCloud sets. The Instagr/am/bient album, by way of example, has 25 tracks by 25 different musicians, and the first track, “Up Above the Hill-Sky” by Marcus Fischer, has as of this writing 9,412 listens, while Christopher Olson’s “Swanoji” hovers well under 1,000, at 633. While Fischer’s track’s popularity is well-deserved, overall it’s clear that the declining rate of listening corresponds almost directly with track placement. The only serious exception is the OO-Ray’s “Silhouettes,” which has 3,714 listens, compared with 1,974 for the track after it and 1,063 for the track preceding it.

In any case, shuffle play, along with the single-track repeat, is a welcome addition. We’re making use of the single-track option in this week’s Disquiet Junto project, which explores the notion of locked grooves, or the practice back in the days of vinyl of having a short single-revolution loop that repeats. The shuffle play will make the resulting set, along with all other SoundCloud sets, all the more enjoyable for listeners to explore. 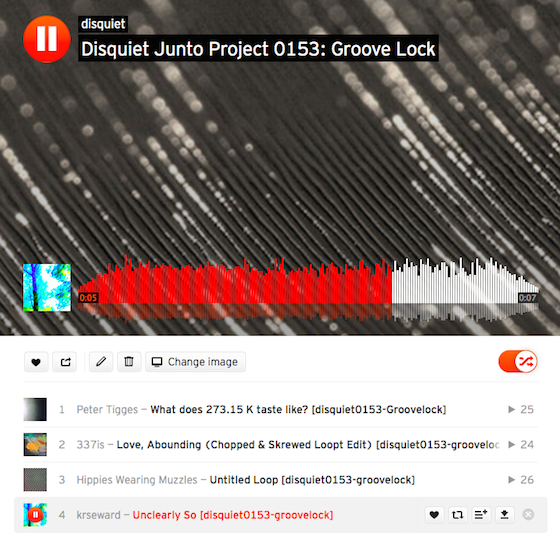 Neither of these two tools seems to have yet been introduced to the embedded player, or the mobile app, but it seems likely that’s down the road.