The bridge as a musical score

Last year BBC 4 ran a three-part series in which musicians looked at the sky and read it as a musical score. Each entry in the series featured two composers, including Anna Meredith, who has posted her piece, “Blackfriars,” on her SoundCloud account. “Blackfriars” features cellist Oliver Coates, who employed a special, curved bow. Curvature is at the core of Meredith’s piece, which is modeled on the design of the bridge that commanded her view of the skyline. 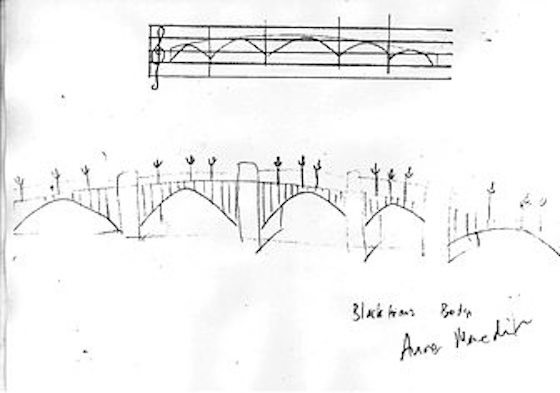 An image, shown above, hosted as part of the BBC’s documentation of the project, shows an initial vision of how the rough sketch of the bridge was turned into shapes on a proper musical score. The completed piece is slow, and centered on swellings that bring to mind the water’s pace, its give and take. Underlying it is this quiet yet intense tick-tock.

Track originally posted at soundcloud.com/annameredith. The other musicians featured in the series include Kizzy Crawford, Julie Fowlis, James MacMillan, Courtney Pine, and Gwilym Simcock. The full series, presented by Tim Marlow, is housed at bbc.co.uk, which among things shows the first page of her score. More from Meredith, who is based in London, at annameredith.com and twitter.com/annahmeredith.