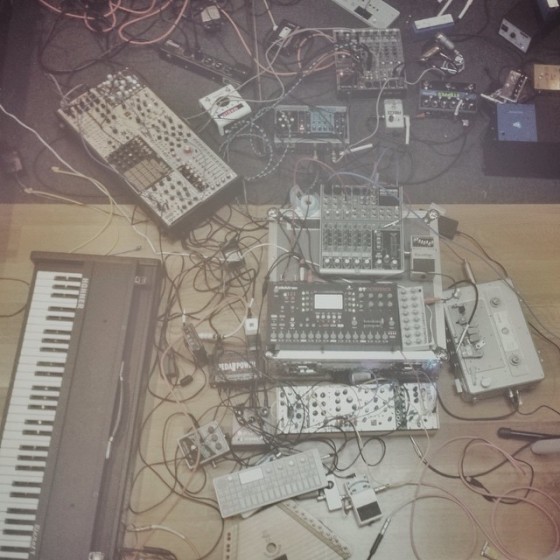 Marcus Fischer has not been updating his SoundCloud account (soundcloud.com/mapmap) with the regularity of Taylor Deupree, who throughout 2014 maintained a near daily journal of sounds from his studio (soundcloud.com/12k), and who has begun to do so again this year. But like Deupree he has been sharing brief instances, 58 seconds of modular synthesizer activity here, two minutes of guitar and cassette tapes there. Some of the tracks are considerably lengthier than Deupree’s entries, and seem closer to finished work. And then there’s an occasion where their journals — or at least the circumstances of their journals — collide, as on this piece from Fischer’s account. It is drawn in part from a show he performed recently with Deupree. The image up top, source from Fischer’s Instagram account, is from that show.

It isn’t from the live performance, per se. It is source audio that Fischer developed for use in the performance, a rich wavering resonance that meanders this way and that, ever so slightly, for the length of its one-minute run, like an orchestra heard from the bar in some grand but dilapidated symphony hall.

Track originally posted at soundcloud.com/mapmap. More from Fischer, who is based in Portland, Oregon, at mapmap.ch.