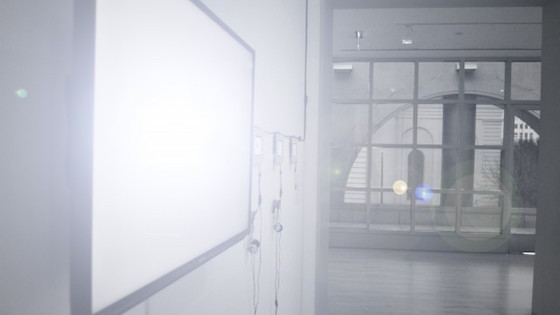 Niki Korth asks great questions. She interviewed me recently about the “Sonic Frame” audio-visual installation I developed for the 45th anniversary of the founding of the San Jose Museum of Art. The work will be on display through the 22nd of this month. “Sonic Frame” is a response to an earlier piece of work, a silent video by Josh Azzarella, that is part of the museum’s permanent collection. The interview was published today at The Big Conversation Space, the website of a collaboration between Korth and Paris-based Clémence de Montgolfier.

Below is the opening question and my response, about the nature of that overused term “disruption” and the unique capabilities of sound in an artistic context. Later in the interview she asks about the source video for the project, the extent to which I was in touch with the original artist, the inherent subject of terrorism, the nature of the Creative Commons, and what was involved in working with around 80 composers in the process of developing the piece.

Korth: The SJMA describes the Momentum exhibition as one that Â¨disrupts the status quoÂ¨ by inviting artists to Â¨interveneÂ¨ on the works from their permanent collection that are on display by responding to them through the creation of new works. Do you consider your work to function as a disruption, in this context? What do you see as the function of disruptions and interventions within art practice more generally, in particular as they pertain to sound?

Weidenbaum: I’m personally a bit hesitant about the specific word “disrupt”because of its current broad use, perhaps its overuse, as an adopted term of tech jargon. Even in tech jargon it’s a meaningful and useful term, but for every useful employment there are dozens that are less than informed, more received, less considered. But more generally, yeah, certainly: this work, like the other work in the Momentum exhibit, was generated as an act of disruption, as the word was specifically employed by the fine folks at the San Jose Museum of Art. I think the museum’s use of the word was a solid choice — the museum is at the heart of Silicon Valley, and this approach to the world, this upending of systems, is very much on the minds of many of the people who visit the museum, the people who drive by it every day, the people who live and work in its vicinity.

The goal of the interventions was to develop something original that influences the audience’s reception of the source work. “Intervention”is a word that the museum also employed, in addition to “disrupt,”and I personally connected a bit more to “intervention”than to “disrupt.”I like the idea of intervening between the original work and the spectator, the idea of being an “active spectator,”somewhere between the original artist and traditional spectator. I am quite engaged by the idea of appropriative musicians, those who work with pre-existing material, being what I like to call “active listeners,”and I saw this project as being something of an “active viewer”— someone who has an impression of what they view, in this case Azzarella’s video, and expresses that impression by making something in response.

I use the phrase “sound as commentary”a lot to describe this process, that there’s a non-verbal yet still sonic way to communicate ideas. The original video is silent and singular, and I worked on something that is sonorous and has myriad points of view. I think anything that reminds people that the art on the wall is the start of a process as much as the end of one is a good thing. We tend to think of art as the culmination of artistic intent, and it’s great to have an opportunity to make active and to present the idea that art builds on art, as well as the fact that our perception of a work can be influenced in many ways by external circumstances. I think that sound is a particularly useful tool in such a scenario because there is always a sonic content for work, even work that is intended to be silent, and drawing attention to that activity can be thought-provoking, informative, disorienting.

The full interview is at thebigconversationspace.org, where the above photo is sourced from.