Modular Activity on a Rainy Afternoon

From waves to phases and beats 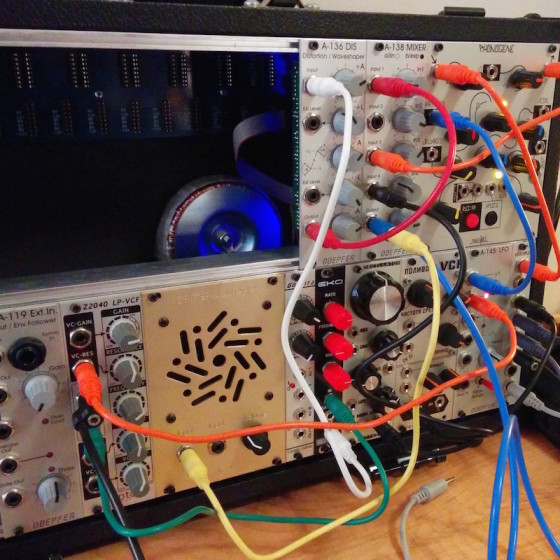 The latest in a series of baby steps with modular synthesis. This is one wave form, a saw wave, doing several things at the same time. Well, it’s two waves, more about the second one in a moment, the second one indirectly impacting the first. The end result is an off-kilter metric pattern with a lot of internal motion and timbre. Drone music often has an implicit rhythmic sense, and this was an attempt to make that implicit sense explicit.

This project benefits from my purchase of the second item from the left on the top row. It’s a small little mixer that lets me combine things with ease, which is to say within the rig, rather than requiring me to use an outboard mixer (which means a bunch more cables and adapters and a power source and surface area).

The original saw wave is doing several things here, all of which are shown in the accompanying image. There’s a pure version of the saw wave going into the mixer — that’s the black cable in the fourth slot down of the mixer. (The combo blue/yellow cable at the bottom of the mixer is the output, which is also going into a little recording device, though this audio was recorded straight from the speaker that is part of the rig.)

The red cable going into the mixer is the end of a fairly long line of processing, and it’s turned down fairly low in the mix. That is the wave first going into a filter, where the resonance is being modulated by a saw wave from a secondary oscillator (the orange cable going into the same filter), and then into an echo, and then into a distortion/waveform shaper. I’ve only just obtained this distortion/waveform module, so I’m way early on in figuring it out.

And finally, a third copy of the original saw wave is going into the Phonogene, which simulates tape effects. In this case the sound is being tweaked by a wave that is a reverse image of the same saw wave that is doing its magic on the filter. OK, maybe that means it’s three waves, total.

All of this was nudged by ear until the rhythmic complexity, the sense of phasing, felt optimized. The goal was to use the same basic wave to do as much as possible, though in the end I also used that pair of secondary LFO waves for two different purposes.

This track originally posted (by me) for free download at soundcloud.com/disquiet. It’s the latest in occasional uploads I’m posting of modular synthesis I’m experimenting with. A snapshot of my rig is at modulargrid.net.