I was invited by the musician and composer Kenneth Kirschner to write liner notes for his forthcoming album on 12k Records, Compressions & Rarefactions, which is due out on July 10th. Mine are one set of notes among several. Also contributing notes are Simon Cummings, Kysa Johnson, and Mike Lazarev. Johnson also created the artwork on the cover. The recordings make for a beautiful album of stasis and motion, ruptured filaments and broken patterns. Kirschner often deals in massive scale in his music, and this album, while managing the length and depth he’s accustomed his listeners to, also heads in other directions. One of the pieces includes Tawnya Popoff on viola. Below, with Kirschner’s permission and that of 12k head Taylor Deupree, are my liner notes. More on the record at 12k.com.

Here are some samples of the album:

And … next Tuesday, June 23, there will be a giveaway in my email newsletter for one physical copy and three digital copies of Kirschner’s Compressions & Rarefactions. 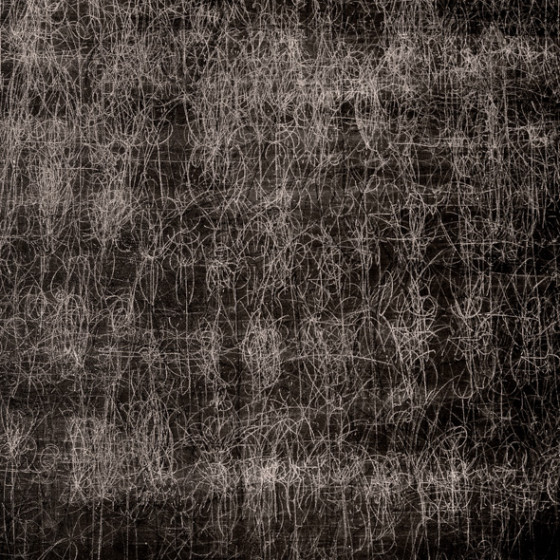 “The Time Within Time”

There is a cloud overhead, and there is an ocean below. There is a vast and slender circle around us. Between us and the circle there is water as far as the eye can see, as far as the mind can perceive. There is no land to be recognized, just water, endless water. The world is a panorama of two half spheres: a gaseous plane above, an aqueous plane below. A thin dark seam surrounds us, marking the stable and eternal truce between the twin planes. Perhaps the stars, when they are visible, might provide some form of orientation, but orientation toward what? Where are we going? We’re just going, nowhere in particular. We go because time passes. In a world without landmarks, let alone land, motion and stasis are close siblings, often mistaken for each other. In every direction, there remains nothing but water. The stars move across the plane above us, but we, whatever direction we move, see nothing but water and sky, and perhaps our own reflection.

The moon passes overhead, notching the pace of time. It casts beams through the thick wood, piercing the lace canopy, alighting on and framing various natural still-life occurrences: congruences of flora and fauna, of naked rock and shallow streams, of decaying loam and iridescent shoots. We have walked seemingly forever, and wherever we walk there is simply more and more forest. There is no out of the forest. There are just trees as far as the eye can see, which isn’t very far, since only a few steps ahead they combine, from various distances, to create the equivalent of a wall, a wall of bark, branch, and leaf. We move from one patch of land to another, making our way through trees — not really our way but the trees’ way, the way the trees allow us to move, the way the landscape shapes our perception, our destiny. The forest is the world. The world is this forest, so dense that for all our wanderings, we never leave much of a trace, let alone make a proper path for anyone else to follow.

There is a life ahead of us, and there is a life behind us. At any moment, much of the past seems to linger at an equal distance, a faded distance, a middle distance. The future is a series of crisp options, all in conflict. We focus on these alternate futures, much as we do on street signs deep in the night, and we try to make one of these futures real, to choose one as a guidepost, as an eventual horizon. As for memories, they hover well beyond recent events, apart from daily concerns, without any interconnection or context except that they all come back to us without warning: first school, first pain, first love, first blunder, first epiphany, first loss, first sailboat ride, first camping trip, first night alone. The futures are sharp if conflicted, and there is a haze to the memories, a lack of focus, a gentle and continuous shifting of the mind’s foundation. And sometimes a sharp recollection pierces, and then it is gone, back to the haze. The further we proceed in life, the more life there is to hover in that past middle distance, and yet the past is never fully occluded. It gathers no density. It is simply always out of reach.

In the music of Kenneth Kirschner we hear slender sounds merge with the functional silence of whatever medium on which they are recorded, and whatever medium on which they are, later, reproduced. This music, in its overwhelming emphasis on quietude and space, tests the pores of whatever scenario it invades. With occasional exceptions for fierce eruptions and rhythmic play, his compositions are the quiet voice that draws the listener in more closely. His music doesn’t require attention or demand attention; Kirschner’s music is a finely tuned engine of attention. And like all music that draws inspiration from ambient, his is a music that inspires attention as much as it benefits from attention. It isn’t music that exists at the moment when it hits your ear. It is music that lingers in the air, in the room, in the moment.

In Kirschner’s music we catch glimpses of recognizable elements, of familiar artifacts: classical-ensemble strings, rich and deep echoes, florid percussive shimmer, aggressive sawing, undulating drones. We listen on as these sounds overlap, layer, eclipse, as each of them in turn recedes into the underlying hazy tonal bed of the work, and as new such sounds arise. Kirschner has many tools at his disposal, and among them the most conspicuous is time. He embraces a sense of periodicity that challenges the listener’s comprehension. His longest fixed works, those with a formal beginning and end, have the dimension of a full-length feature film — except, of course, in terms of narrative. That’s to put aside, for the moment, his literally endless works, the ones that employ algorithmic progressions to proceed for, in essence, an eternity. Even in the most generous and contemplative and present listening scenarios, one will lose oneself in the ocean or forest — or alien landscape, or post-industrial labyrinth — of his two-plus-hour pieces.

So dedicated is Kirschner to these through-composed, shard-faceted monoliths, that a half-hour work of his registers as “short,”even if it takes about that much time for a martial glisten to take on a richer, more varied percussive patterning. These “shorter”works serve as listener-training tools in advance of the substantially longer works — they’re not so much sprints before marathons as they are leisurely hikes before undertaking the Appalachian Trail. When, for example, that same glisten appears later below a wider range of rhythms, it is not just an element among many; it is a memory of how the same glisten once appeared, earlier on. The re-surfacing of the glisten serves as a loop, bringing the work full circle, thus suggesting an even lengthier span. The short work is a fragment of a possible work. It is a glimpse of time within time.

If time is Kirschner’s most self-evident compositional tool, then memory is his most active one. As we find our way — that is, find a way — through the immersive, perception-consuming, periphery-spanning territory of his work, as time passes, as life passes, our sole guide is the work itself.

This first appeared in the June 16, 2015, edition of the free Disquiet “This Week in Sound”email newsletter: tinyletter.com/disquiet.