We already have our jetpacks. We just happen to call them drones. Sure, these drones don’t carry us into the sky the way we were promised in our childhoods, but they carry with them our eyes, our imaginations, and our ambitions. Now that we live so much of our lives online, is it much of a stretch to suggest that drones take us up in the air?

Thanks to Tim Prebble, drones also carry with them our ears. Prebble is an accomplished field recordist who lives in Wellington, New Zealand, where he runs Hiss and Roar (hissandaroar.com), a sound design library of everything from fireworks and metal resonance to chimes and tortured pianos. His lengthy sound-design film credits include Antarctica: A Year on Ice, 30 Days of Night, and The World’s Fastest Indian. Prebble this week posted on Facebook a single photo of a small consumer-grade (i.e., non-military) drone carrying an audio recording device (the second still image down below). When I asked him for more details of what he was up to, he sent me a lengthy account, and many more photos, plus the two videos shown here. The video up top is a quick summary of experiments he’s been doing recording with drones, and recording the sound of drones. It’s a Doppler paradise.

Best experienced in headphones, the above video shows various settings for the drone recording, including an opening shot from the drone’s own perspective, while recording the audio effect of it passing by several microphones. Later on in a subsequent clip, the three-dimensional motion can be experienced as three-dimensional sound: stereo manages left and right, while relative volume accounts for foreground and background. Throughout, the primary sound is that of the drones themselves, a sound Prebble likens to that of bees. The results are striking.

In experimental electronic music, the word “drone” is virtually a genre unto itself, one that explores stasis in everything from field recordings to sine waves to layers of ambient textures. Since the word “drone” has come, popularly, to refer to flying devices, jokes are made regularly about “drones of drones.” Prebble has managed to make the joke real, and the result is no joke — it is alternately eerie and warm, anxious and majestic.

Here is Prebble himself, from an email he sent to me with permission to share, on what he is developing:

While I’d seen plenty of drones & footage shot with them online, I never really appreciated their potential until I worked on a short film project recently where we wanted aerial footage but a helicopter was unaffordable. We ended up hiring an experienced drone pilot and after the first shoot I began dreaming about their potential, for image but also for sound. 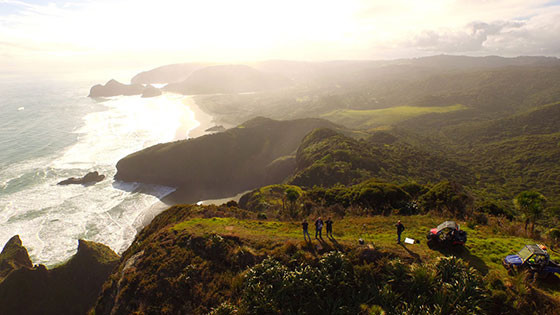 Once the project was finished I decided to get myself a quadcopter, a DJI Phantom 3 Pro. My first experiments were focused on technically learning to fly it, but also learning to deal with the discombobulation of having a set of eyes that can move remotely in three dimensions. I consider a camera drone akin to having a set of tracks & dolly (or a camera crane) which can move in any of the three dimensions without the constraints — the first video I shot was effectively a vertical tracking shot from outside my house…

One aspect of using a drone that can be problematic is that it tends to attract people, and avoiding slack jawed observers in shots can be a challenge. But it is often the sound of the quadcopter that first draws peoples attention – if you haven’t heard one close up, then the best description I can think of is that they sound like a small swarm of angry bees, and when you do fast movements the bees sound very angry! Ever since that first drone shoot I’ve been fascinated by quadcopter sounds, which led me to this experiment: 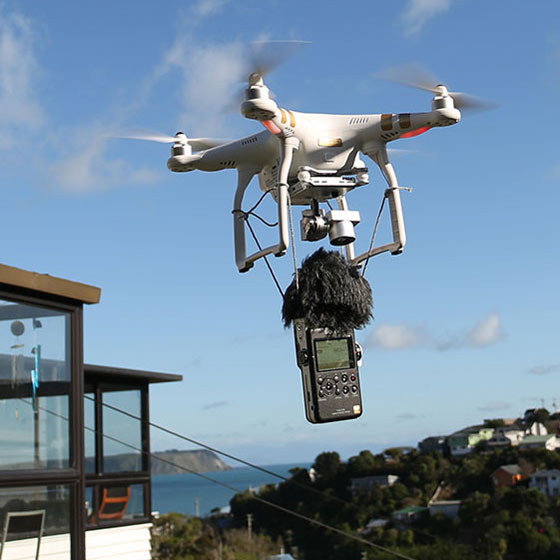 From a sound designers perspective I LOVE the idea I can control & perform movements with this swarm of angry bees, so the first idea I am pursuing is to capture a library of sound effects, much as I would for a vehicle for a film. I am capturing a lot of variations of quadcopter start, take off, away, hover, approach and land, as well as doppler passbys & moves at various speeds. While the resulting library will be useful for practical purposes it will also be rich source material for manipulation & processing”¦. 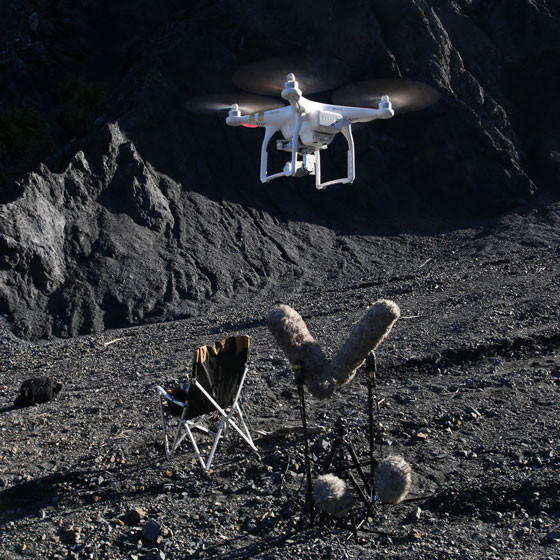 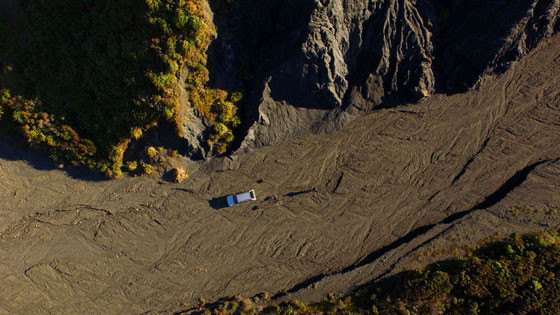 But as with any vehicle recording, exterior recording is only half the story. When recording vehicles I happily capture onboard perspective sound to multitrack; placing mics in the engine bay, near the exhaust, near tyres and inside the cabin. Effectively capturing constant perspective, isolated elements to be rebalanced as per the needs of the film.

So that first photo above was an attempt at recording onboard, constant perspective quadcopter sounds. I’d first thought of using a pair of tiny DPA4060 lavalier mics but the recorder soon became the issue eg my Sound Devices 722 recorder weighs 1.2kg & while the Phantom 3 is powerful it was never going to carry more than its own bodyweight as cargo. So next I tried the Sony PCM D100, rigged to hang below the drone.

The results were surprisingly good – there was some wind noise, a 150Hz HPF got rid of most of that but more layers of Rycote wind protection will achieve that better & at the source. There was also a very small amount of motor whine & electrical interference from the camera gimbal, but once the rotors are working that sound is masked. The next iteration of rigging I suspended the recorder on rubber bungy rather than string, to avoid transmission of any vibrational noise, and I also experimented with different lengths, attempting to place the recorder & mics further from the prop wash. 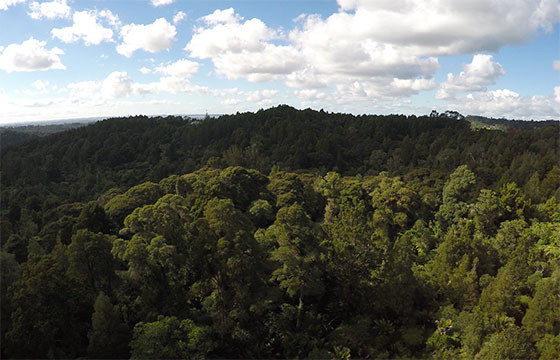 A secondary sound recording idea I am pursuing with the drone is purely as a transporter. Imagine placing your mics in the top of a 1000 year old Kauri tree, or on a small island in a lake. Both would potentially provide unique ambience recordings, but getting the mics into place is difficult. So I’ve been thinking about whether there is a way to have the drone carry my recorder to such locations, safely land & power down to allow clean ambience recording, and then fly home. The recorder hanging below the quadcopter means that landing is difficult – I’ve avoided this issue so far by hovering the drone within arms reach & simply grabbing it & powering off. With the extra weight I would want to be VERY confident before risking losing my drone & recorder – if it toppled over while landing then it would be a very tough decision to either abandon it, or risk life & limb to retrieve it! 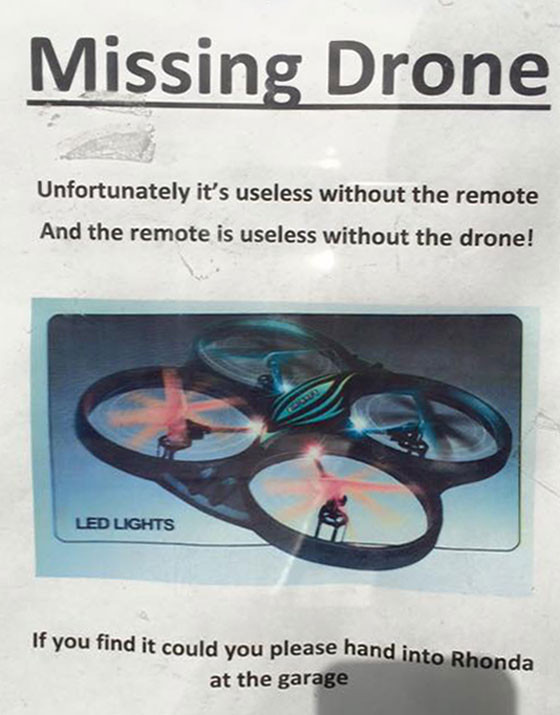 Suspect we will be seeing more ads like this in future!