Can You Hear the Arctic?

And can you play the arctic? Ask Karen Power and John Godfrey. 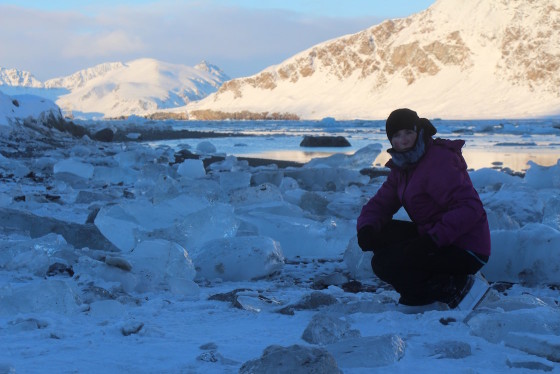 For some reason, the track page for this live improvisation by Karen Power and John Godfrey isn’t allowing me to embed it here. So, to hear it, head over to Power’s SoundCloud page, at soundcloud.com/karenpower.

Earlier this year, back in January, Power worked with Joyce Majiski on an installation at the Yukon Arts Centre titled Inside the Glacier. Both of the women were part of an Article Circle Residency Program expedition to the Yukon to collect sounds and develop art from them. This recorded performance teamed Power with musician John Godfrey, and together they, through live improvisation, developed a sonic response to the Yukon soundscape that emanated from another room in the gallery where this was all recorded. Their initially tentative plucks and whirs emerge from the winds and watery sounds of the arctic audio documents. At times the sounds are distinct from the sourced audio, but much of the time their playing achieves a naturalistic presence: strange birds in strange weather.

There is a host of images from her arctic trip at karenpower.ie, depicting the use of omnidirectional microphones inside a wooden boat, microphones inside the remains of a locomotive, hydrophones inside icebergs, and much more. Power produced this half-hour documentary, Can You Hear the Arctic?, about her acoustic experience in 2013:

Track originally posted at soundcloud.com/karenpower. More from Power, who has a PhD in acoustic and electroacoustic composition from SARC (Sonic Arts Research Centre) in Belfast, Ireland, at karenpower.ie. More on the installation at yukonartscentre.com. Photo up top by Tina Kohlmann, from the British Library site at britishlibrary.typepad.co.uk.