The Sound of Terroir / The Terroir of Sound 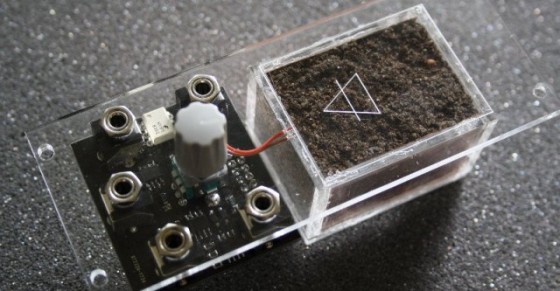 Dirt is both filtered and filter. It is the thing we sift through to get to something more valuable, and it is the thing we use, as in the case of charcoal for example, to extract something else entirely. We sift dirt out or we use dirt to sift something out. Often sound is described as “dirty,” which means it is tarnished somehow, has an edge, is perceptibly and concertedly imperfect. That concept becomes literal with a new modular synthesizer unit called the ERD, which stands for Earth Return Distortion. As depicted above, it sends a signal into dirt, and then extracts the signal from the dirt.

The developer of the unit notes that sound has its own, as they say in the wine business, terroir: “Local electrical and atmospheric signals can condition and distort the earth signal. Two jack connections are also included, optionally switching out the local earth block in favour of routing through local earth piles and forest sites.” Discounts are offered in exchange for exotic soil: “Edgar Allen Poe earth from Baltimore, vampire earth from Transylvania or Whitby.”

Track originally posted for free download at soundcloud.com/martin_howse. More on the ERD unit at 1010.co.uk. Found via a post by Chris Sloan, where there is some discussion as to whether or not the module functions as described, and synthtopia.com. Here’s some additional coverage at voltagecontrollab.com.