In a track by Louise Rossiter 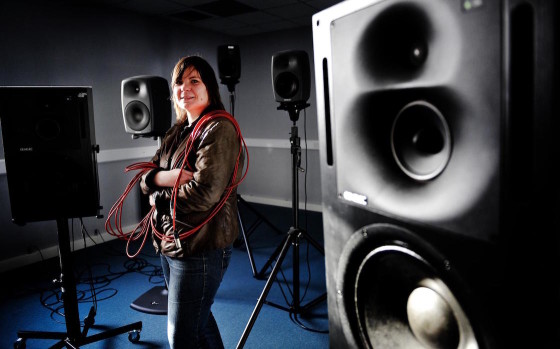 When, a few seconds in, the click clack chitter chatter of Louise Rossiter’s elegant “Rift” gives way to a break-beat sliver of silence, you know something’s coming. For one thing, the track certainly isn’t merely two seconds in length. For another, it’s called “Rift,” not “Cliff,” so there must be something on the other side of this gap. But also, there’s the SoundCloud waveform, and the waveform of “Rift” shows plenty of sound, and plenty of rifts, ahead.

What follows is variety of play on that beat, and the rift. A few other sounds mingle: something like a whip spun overhead, something like a top spinning on metal (headphones are a must), something like the sizzle of a match, something like an empty glass bottle bouncing on a hard surface but failing to break. The SoundCloud waveform may spoil the silences and the peaks, but it doesn’t begin to hint at the sounds.

She writes, in a brief accompanying note:

There are a number of different meanings of Rift permeating this work. The deliberate destruction of source materials allow for the creation of gestures that permit the fracturing and breaking of the sonic space. One of the pieces principle functions is an exploration of relationships between sound and silence. The silences that punctuate the sonic canvas throughout Rift are intended to allow the listener to reflect on events in the work, and anticipate what might follow.

Rossiter has her way with the battery of noises she has compiled. “Rift” is prickly and fiery and convinces your ears to pay close attention.

Track originally posted at soundcloud.com/mad_lou. More from Louise Rossiter, originally from Scotland and based in Leicester, U.K., at louiserossiter.com and twitter.com/electro_lou.