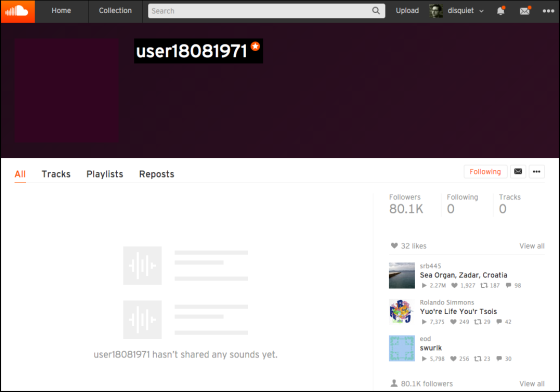 At some point in the past 24 hours, the 260 some odd tracks in Aphex Twin’s soundcloud.com/user18081971 have gone missing. In the past he’s deleted and re-added them, so they may show up again.

Before he had the user18081971 account, whose seemingly generic numerals in fact represent his birthday, he used the account user48736353001. That account went blank in advance of the tracks appearing under the user name user18081971.

There’s a detailed spreadsheet of the tracks associated with the account, via a Reddit user. The spreadsheet includes the brief commentary that Aphex Twin posted in the bio field for the account. Among these were political references, shoutouts to listeners, and a brief notice about the recent death of visual artist Paul Laffoley.

For the time being this development means that the Selected Ambient Works Volume 3 beta playlist I have been developing is now blank. I may be able to recreate it based on YouTube re-postings of the audio.

There remain six tracks at soundcloud.com/richarddjames.

Update (November 26, 2015): One thing that does remain at the user18081971 account is a collection of likes, at this count 32, ranging from a Âµ-Ziq track dating back to 1993 to a recording of Nikola BaÅ¡iÄ‡’s sea organ in Zadar, Croatia, the latter of which has achieved 2.7 million listens.

Update (November 28, 2015): And a few days later, the account is no longer empty. Back on the page is a track whose purpose is for him to ask people to post links to their own music. This track clearly isn’t new. It must have been made private and then brought back, because it has comments going back weeks.