Visualizing ambient music, and its deviations

The waveforms that accompany SoundCloud tracks can be as misleading as they are informative. With pop songs, you can quite literally see the breakdown between verse, chorus, and verse — and if you have a good eye you might even spot a bridge. With techno you can see the beat. Noise and ambient music are, to some extent, especially with drone-based noise, more a matter of volume than anything else — they’re often characterized visually on SoundCloud by a homogenized block of sound that represents a relatively minimal variation in volume. What can sound relaxing often looks hard as a brick. However, the look of a waveform can be deceiving. The only thing that’s dependable is a hard edge, which generally accompanies mechanical sounds.

As for this piece, “Their Time Up There” by Todos, the visualized sine waves are especially close to what is heard. The track is a series of adjacent swells, one after the other, the differences between them fairly indistinct. At the time I first listened to this, there were two clues that something, an alteration, a dramatic shift, was in the making. One was the evident push up about two thirds of the way through, where the waves get taller, sharper, longer — suggesting volume and length, a combination of something both more intense and yet even slower than what came before. This is very much the case. 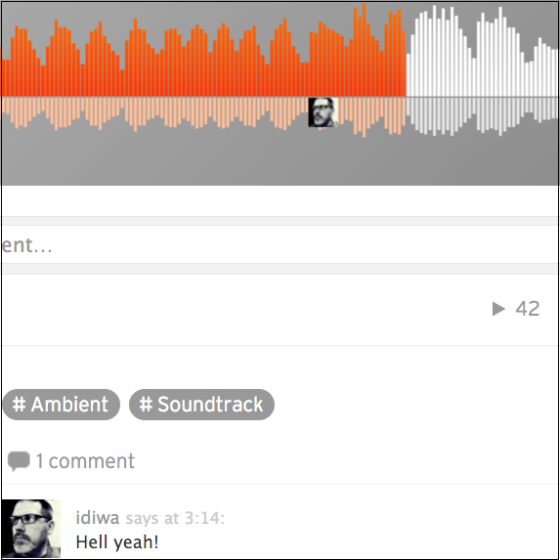 The other clue was the splendid “Hell yeah!” from listener Idiwa. He called it. The burst that occurs at that moment is quite splendid, like your ears popping as the plane lands, just as the sun breaks through the clouds. Only in the context of listening to ambient music regularly would this alteration, this sudden development, deserve a “Hell yeah!” — but if that is a zone your listening occurs in, then your response will likely be similar to Idiwa’s.

Track originally posted at soundcloud.com/djtodos. More from Todos at twitter.com/todosofficial. (Account found via a repost of a different Todos track by Novitzkas of Cape Town, South Afrika.)