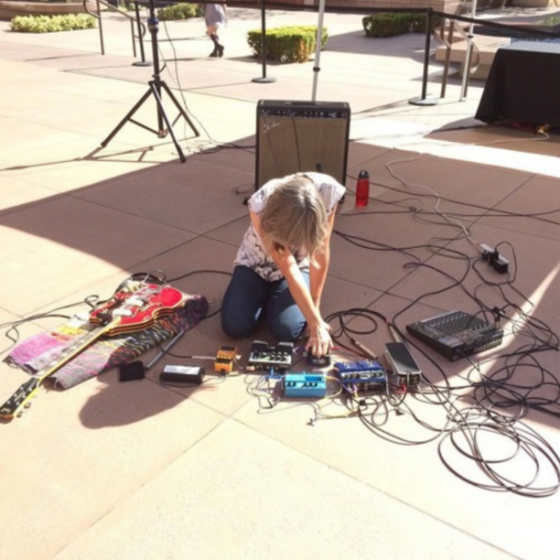 The sheer noise of Gabie Strong’s live solo guitar performance is exhilarating. She played at the Museum of Contemporary Art, Los Angeles, back on October 25, 2015, and the set was captured in a nearly 17-minute audio recording, titled “Sacred Datura.” It starts with the sound of an amp being turned on, of a guitar cord making its electric connection, and never veers particularly far from that. It’s all wild static and drenching noise, noise that comes in deep swells, hanging for extended stretches, and then dipping into near silence. It’s rapturous stuff. The last minute is especially rich, when a final screech is burnished by the sound of wind against a microphone.

Strong writes in an accompanying note:

The title refers to the native California datura species that populated the hillsides of what is now downtown Los Angeles, and was used by indigenous peoples of the Southwest during puberty rituals. Otherwise known as Jimson Weed, sacred datura is a common female-flowering plant that when cooked and ingested causes out-of-body sensory effects and hallucinations. In poet Dale Pendell’s excellent book Pharmako Gnosis, he classifies datura as Daimonica, and writes that “Datura and her sisters … they can sneak up on you and steal your mind and you don’t even know.”

Track originally posted at soundcloud.com/gabiestrong. More from Gabie Strong at gabiestrong.com and twitter.com/Dreammmama. The audio was recorded by Jorge Martin. The accompanying photo is by Chrystanthe Oltmann.