When you think string quartet, certainly you think about creepy flying life forms in Africa that feed of the tears of other flying life forms. That is the scenario that informs Anna Höstman’s tensile and invigorating string quartet “Moths Drink the Tears of Sleeping Birds.” Premiered on November 14 of last year, the work is as slow and steady as you might expect of something that preys on things far larger than itself. The work moves from slow sawing to angular, intense slashing. At 15 minutes, it produces an impression of the scenario that is thick with drama. Certainly there is an intensity in the brief moments of fierce action, but the real beauty comes from the patience, both in the composition and the performance, to layer textured, paper-thin lines atop one another for extended periods of anxious near-silence.

Look closely at this image (from newscientist.com) and you’ll see the moth’s dagger-like nose stuck into a bird’s eyelid: 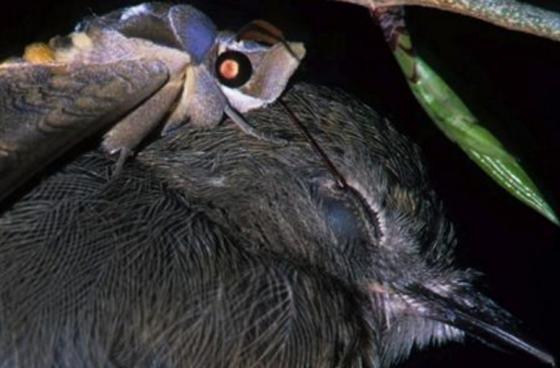 Here’s an extreme closeup, from the National Institutes of Health (nih.gov), that provides eerie detail of the moth’s sharp nose: 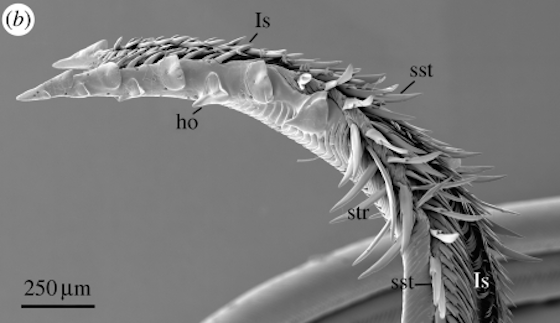 Scientists have recently revealed that a species of moth in the Kirindy forest of Madagascar drinks tears from the eyes of birds. Birds can usually fly away from these predators, but not while sleeping. The Madagascan moths were observed on the necks of sleeping magpie robins and Newtonia birds, with the tip of their proboscises inserted under the bird’s eyelid, drinking avidly. Sleeping birds have two eyelids, both closed. So instead of the soft, straw-like mouthparts found on tear-drinking moths elsewhere, the Madagascan moth has a proboscis “shaped like an ancient harpoon,”with hooks and barbs. It is inserted under the eyelid where the barbs are used to anchor it in place. The team does not yet know whether the insect spits out an anaesthetic to dull the irritation. They also want to investigate whether, like their counterparts elsewhere, the Madagascan tear-drinkers are all males who get most of their nutrition from the tears.

The piece by Höstman brings to mind another recent work of chamber music that has its basis in the dark corners of the natural sciences, “Euphorbia,” composed by Ylva Lund Bergner, heard in a performance by the Curious Chamber Players. Her piece’s name, and mood, come from a deadly plant in Denmark.

One thought on ““Moths Drink the Tears of Sleeping Birds””