Cocteau, Poulenc, Duval, and technological art of the telephone 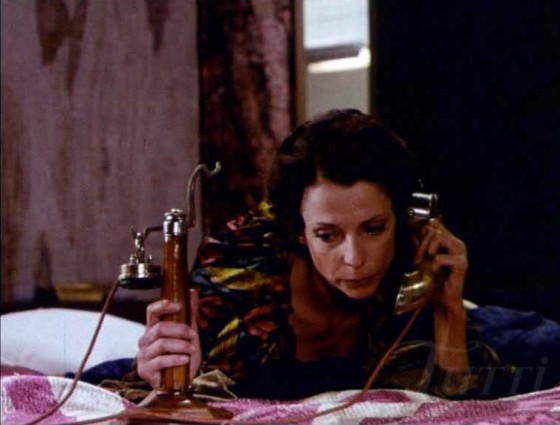 Denise Duval sang passionately about broken telephone connections, about the way our technology can mimic, taint, and amplify human connections. She died a week ago, on January 25, the New York Times reported today.

A French soprano born in 1921, Duval is best known for her work with the composer Francis Poulenc. Foremost among the pair’s collaborations is the opera La Voix Humaine, based on the play by Jean Cocteau. La Voix Humaine is high on the list of essential viewing and listening if you’re interested in art informed by technologically mediated human interaction.

The opera tells the story of the end of a love affair. Expertly constructed, it unfolds as one half of a phone conversation. The other half takes place on the far end of the phone line, unheard by the audience. The woman is Elle, and Duval was the first to perform the role. There’s a filmed version of Duval’s performance, directed by Dominique Delouche, which uses another technology, television, to emphasize the creative constraints inherent in Cocteau’s vision: a woman, alone in a room, trying to navigate a failed love — and her own faltering psyche — using failing technology.

I spent a chunk of last year working on — and failing at — an extended essay about the intersection of art and technology that just never ended up going where I’d hoped it would. Only toward the end of the writing process, before I put it away half-finished, did I finally switch from wondering about the relationship between the artist and the technology and, instead, began to focus on the audience’s experience of technology. At that point I’d blown too much time and just couldn’t dedicate myself to it anymore, though I hope to get back to it at some point.

This morning, having read the news of Duval’s death over coffee, I was reminded of the centrality of that telephone in La Voix Humaine, not just to Elle, but to the audience of both the play and the opera. The play was first performed in 1930, the opera in 1958. By 1970, when Delouche’s filmed version was broadcast on television in France, the phone was long since not just an everyday but essential part of life. To witness Elle’s story in 1930 must have been a very different thing than in 1970, from the perspective of an audience’s experience of the phone as a lifeline. There is something very J.G. Ballard about La Voix Humaine, as if it’s taking place amid the narrative of his novel High Rise, like Elle lives in an apartment whose door the book’s narrator never happens to knock on. 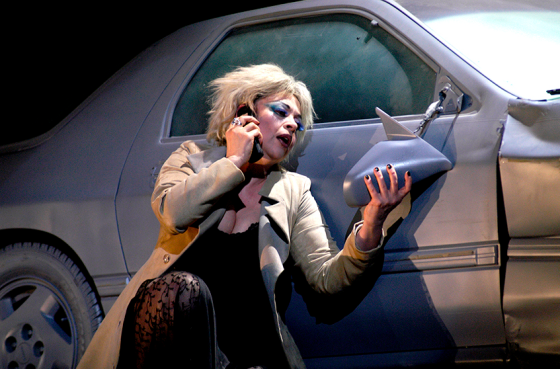 Eventually La Voix Humaine did leave the boudoir. For example, a staging by the Cincinnati Opera’s Nicholas Muni in 2003 re-situated Elle (soprano Catherine Malfitano, above) as the survivor of a car accident. We witness Elle wandering around the wreck while she tries to communicate with her former lover. The wreck isn’t merely a contrivance to switch to a cellphone. It’s part of the original story that Elle reveals her attempted suicide. In the Muni depiction, the scene of the accident serves as both setting and evidence. Of course, switching to cellphone in 2003 also made sense because the phone needed to cut off once in awhile, something far more common then — and today — on a cellphone than on a landline.

The lingering lesson of La Voix Humaine may be that if you’re making technological art, ask yourself if you are reflecting on the means by which that technology is infused in the lives of its audience.

The Delouche version with Duval is on YouTube in four parts. The image up top was colorized (and found at tutti-magazine.fr). The original is in black and white. 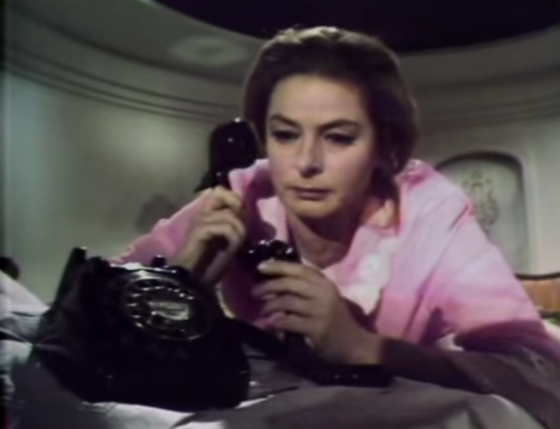 Also on YouTube is an Ingrid Bergman (above) version of the play, from 1967.

And to bring things back around to electronic music, there’s an audio-only version of the play done for the BBC by Scanner, aka Robin Rimbaud, that was first broadcast back in 1998. It stars Harriet Walter, best known these days as Lady Shackleton on Downton Abbey and as the doctor who briefly but memorably tends to Chewbacca in Star Wars: The Force Awakens. The Human Voice is an important transitional work for Rimbaud, as it employs techniques he developed when making music to accompany cellphone conversations captured on scanners (hence his moniker), but applies them to prerecorded dialogue — or, in this case, monologue.

This first appeared in the February 2, 2016, edition of the free Disquiet “This Week in Sound”email newsletter: tinyletter.com/disquiet.