On Cortney Harding's book, How We Listen Now: Essays and Conversations About Music and Technology 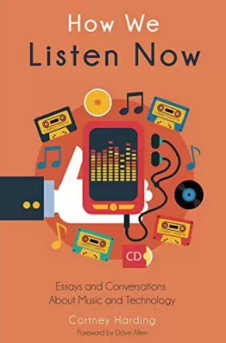 I just finished reading Cortney Harding’s book, How We Listen Now: Essays and Conversations About Music and Technology. Harding is, I think, one of the most actively curious observers of where popular music is headed. I first read her on Medium, where she was writing in detail about aspects of the music industry that befuddle me — like me, she wonders why “discovery” is presumed to be a thing for which there is any significant economic value or cultural demand — and, better yet, things that never occurred to me, like the role of messaging apps in music consumption or why musicians aren’t making more regular use of Twitch, the video-game streaming service.

Too much online writing is people trying to be first or loudest on a popular topic. Harding, to the contrary, spends at least half her time on things few people are even aware of, and what roots her work is that she connects her extrapolations back to popular music. Her book is a collection of such posts (the “essays” part of the title) and transcriptions of interviews and podcasts (the “conversations” part). This means a lot of it is out of date, but that’s not a knock, because the work was quite timely when it was first posted. Its timeliness is its strength. It’s also not a knock because Harding is entirely up front about predictions that don’t pan out and about her own interests, both cultural (she acknowledges that she can’t admonish a streaming service for not having music she discovered on a South African awards ceremony) and professional (she has worked and consulted for various tech companies, in addition to having worked at Billboard). It’s also worth noting that Harding self-published the book (through createspace.com), which ties in nicely with her occasional consideration of a “post-label” world in which musicians do what they need to get their music out there. More from Harding at twitter.com/cortneyharding.

This first appeared in the February 9, 2016, edition of the free Disquiet “This Week in Sound”email newsletter: tinyletter.com/disquiet.