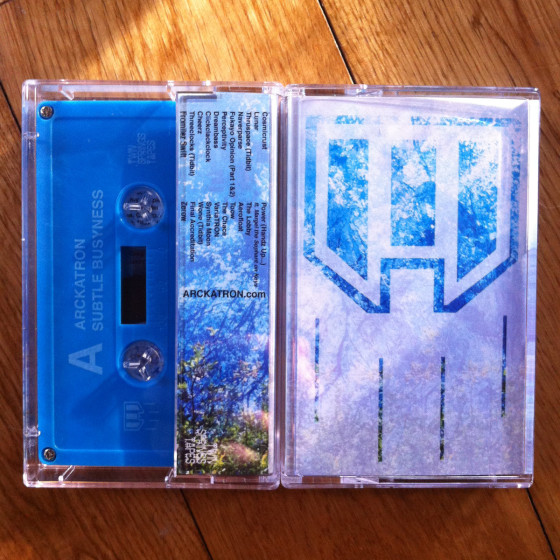 The fine, Los Angeles”“based abstract beatmaker (until very recently of Philadelphia) Arckatron (aka Shawn Kelly) uploaded two tracks from his forthcoming, 21-song album, Subtle Busyness, at the start of the year: the blissfully steady-going “Lunar” and the wonderfully meter-defying “Aerofloat,” which warped this way and that as its rhythm ebbed and flowed. Those first popped up on the SoundCloud account of the label releasing Subtle Busyness, Twin Springs Tapes. (I wrote about them at the time.)

Now four more tracks, along with “Lunar” again, have been uploaded to the Twin Springs Bandcamp page: the surreal opening cut (“Cosmicrust”), a piano-against-percussion piece titled “Power (Handz Up…),” a funky video-game gambit titled “Toow,” and a track titled “VariaTRON” that plays pinball in your head with intense stereoscopic, microscopic beats.

And there’s a lovely video for “Lunar,” sort of an animated lava lamp with a subtle hint at Arckatron’s logo, on YouTube:

The album is up for pre-order for a mere $6, including the cassette (and including shipping in the U.S.) at twinspringstapes.bandcamp.com. The official release date is February 23. The cassette edition is limited to 100.