A lightly annotated clipping service — and because I was prepping for the second week of class, this week’s This Week in Sound is a bit more rangy and a bit more cursory. Then again, maybe it should be more rangy and cursory in the first place:

Brain Tunes: The New York Times reports on MIT research that seeks to codify the human experience of music: “By mathematically analyzing scans of the auditory cortex and grouping clusters of brain cells with similar activation patterns, the scientists have identified neural pathways that react almost exclusively to the sound of music.” As C. Reider noted on Twitter, the definition of music in the research is peculiarly limited. Reider points to this section of the piece: “When a musical passage is played, a distinct set of neurons tucked inside a furrow of a listener’s auditory cortex will fire in response. … Other sounds, by contrast — a dog barking, a car skidding, a toilet flushing — leave the musical circuits unmoved.” Alex Temple put it well: “If people are still saying this over 100 years after Russolo’s ‘The Art of Noise,’ they’re probably never going to stop.” And Nick Sowers: “Sorry NY Times, my musical circuits are also moved by dog barks and car skids. Maybe not toilet flushes tho.” 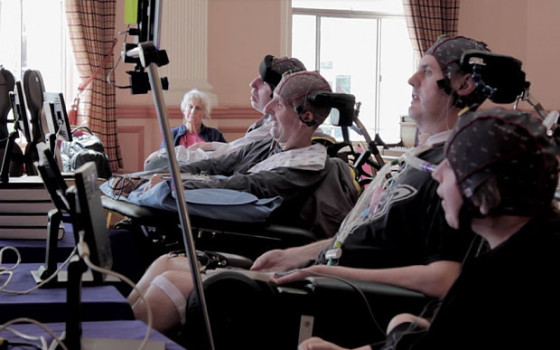 Paramusic Union: The feel-good music-tech story of the week must be that of Rosemary Johnson (telegraph.co.uk), a violinist whose career was stopped short due to a car crash that left her severely disabled, unable to speak or even move. But after a decade of effort at Plymouth University and the Royal Hospital for Neuro-disability in London, Johnson is now producing music through technology that lets her control computer equipment with her brain. The photo above shows Johnson and three other disabled individuals who, along with the Bergersen String Quartet, form what they call the Paramusical Ensemble. 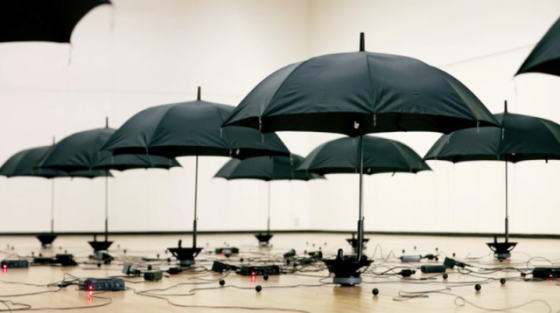 Umbrella Stands: The fact is every week I could feature one or another new work of sound art whose visual impact results from a preponderance of speakers — and I probably will. This week’s, above, is of an installation, Re-Rain, created by Kouichi Okamoto and on display at the Shizuoka Prefectural Museum of Art in Shizuoka City, Japan. Each speaker emits the sound of rain, which is reflected off the inside of the umbrellas: thecreatorsproject.vice.com. 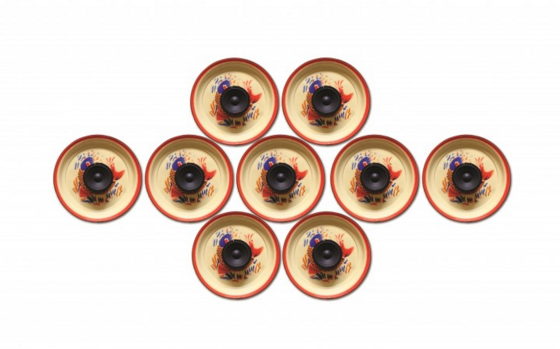 Lagos Sonics: Speaking of exposed speakers, above is a shot from the washingtonpost.com site on Emeka Ogboh’s “Market Symphony,” a new work displayed at the National Museum of African Art. The speakers, which play sounds from Balogun Market in Lagos, and elsewhere in Nigeria, are installed on “colorful enamelware trays” of the sort found in the market. It’s the museum’s first sound installation. (I may be in D.C. at some point in the next few weeks, and if I get there I hope to check out this exhibit.)

Muting Istanbul: Imagine being able to mute or amplify individual elements from what constitute a city’s soundscape. AteÅŸ ErkoÃ§ has produced such an installation in Istanbul as part of the exhibit Everyday Sounds: Exploring Sound Through Daily Life: dailysabah.com.

AM Unplugged: Apparently the mechanics of electrical cars don’t go well with AM radio, reports music3point0.blogspot.com: “cars like the Tesla Model X or BMW i3 don’t install them since the AM reception is impossible due to the internal electrical noise of the car” — via motherboard.vice.com, twitter.com/jeffkolar.

This first appeared, in slightly different form, in the February 9, 2016, edition of the free Disquiet “This Week in Sound”email newsletter: tinyletter.com/disquiet.