This is a minute of sound recorded just past midnight and then subsequently reworked digitally:

The audio plays on three separate channels, the source tracks slightly out of sync, each channel being muted at random, with a little live, real-time human interaction on my part to nudge the listenability and sense of overall composition. That is, “human interaction” distinct from the human interaction involved in the process of setting up the whole random-mute system.

It’s an experiment in making something just using the iPad. The mixer is the iOS app AUM and the mute is being triggered in an iPad app called Xynthesizr. There is a bit of effects being implemented on the three channels. One is being lent an echoing depth, thanks to the Dahlia Delay app. One is getting lightly distorted, thanks to the Saffron Saturator app. And one is being lightly tweaked with some filters internal to the AUM app.

I have a lot to learn about all these apps. This began as me trying to get the AUM muting triggered by the Fugue Machine app, but that inter-app functionality evaded me for more than one channel. The Xynthesizr worked fairly smoothly, largely because someone introduced me to the MIDI Wrench app, which let me figure out the note values of what’s being emitted by Xynthesizr, so I could assign them directly to be interpreted as on/off signals by AUM. All of which said, I’m still fumbling about with the tools, finding my way. The image accompanying this track is a screenshot of the AUM app with the three channels in view: 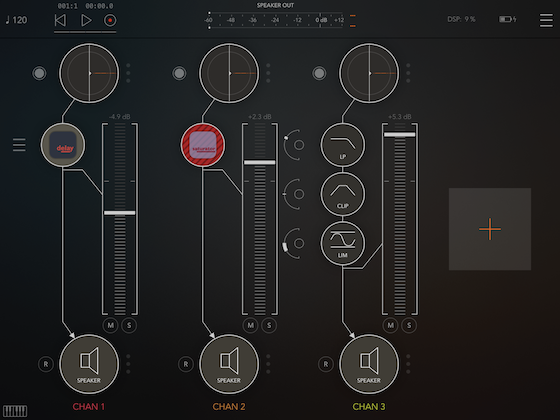 This is a reworking of a single minute of audio recorded by Forelight. The original track is titled “Midnight {disquiet0160-oneminutepastmidnight}.” It was part of the 160th weekly Disquiet Junto project. That 160th project was the first in an ongoing series, collectively titled One Minute Past Midnight, that explore nocturnal ambience.

More on the One Minute Past Midnight series here: oneminutepastmidnight.com.