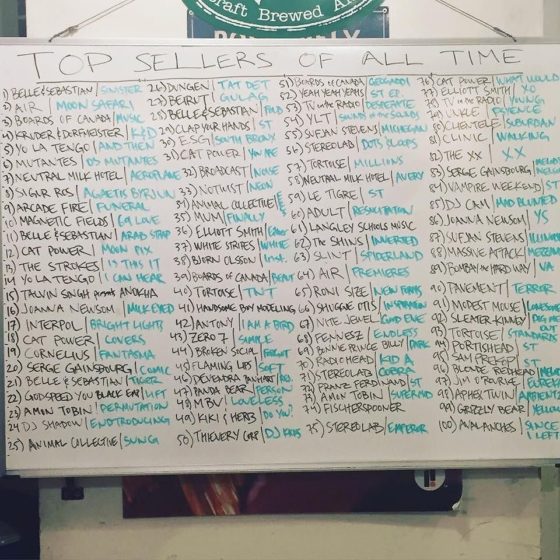 This white board shows the top 100 albums sold at the excellent record retailer Other Music in its 20 years of existence in downtown Manhattan. The store shuts this week, on June 25, and the board was posted commemoratively at the website brooklynvegan.com yesterday with some light annotation. I first saw the picture when Amon Tobin tweeted about it, saying, “Peace out Other Music. There will never be another store that can move over 1000 copies of an Amon Tobin record.” There’s only one Aphex Twin record on the board, and while the photo cuts off, it appears to be Selected Ambient Works Volume 2. All it says is “Ambient” with what looks like the “2” truncated mid-numeral (a reading confirmed by that Brooklyn Vegan post). 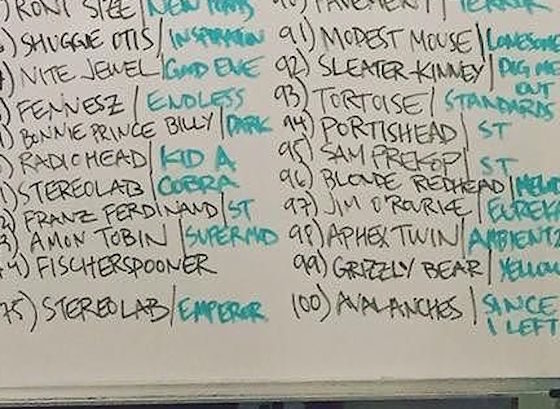 When Bloomsbury published my 33 1/3 book on Selected Ambient Works Volume 2 in 2014, one bit of feedback that confused me was from people who couldn’t understand why I hadn’t written instead about the earlier Selected Ambient Works, or the album titled Richard D. James Album, or another of his releases. My response was usually along the lines of “I wrote about this record because it’s the record that captured my imagination.” What interested me about the Other Music board is that no other Aphex Twin record made the list — not only did Selected Ambient Works Volume 2 appear on the top 100, it was the only Aphex record to make that cutoff. As the discussion at Brooklyn Vegan makes clear, Other Music had its own take on culture (“OM was more DJ Shadow or … J. Dilla than the Beasties,” writes Bill Pearis). While consumers were free to buy what they wanted at the store, the store in various ways shaped the tastes of the people who shopped there.

The store was also, in turn, shaped by time. Other Music’s history closely parallels Disquiet.com’s. It launched in 1995, a year before Disquiet.com did, and it was right around the corner from Tower Records. I was still an editor at the Pulse! music magazines published by Tower in 1995 — I joined the company in 1989 and left in 1996, a decision that led me to start Disquiet.com, which turns 20 on December 13, 2016. Tower was based in West Sacramento, and I lived alternately in Davis and Sacramento during my tenure. I’d moved to California from Brooklyn in 1989 to take the job. Selected Ambient Works Volume 2 was released in 1994, a year before Other Music opened.

The culture of a record store, the way you learn about music, is something that online retailers (including streaming services) have failed so far to emulate particularly well. Rdio probably came closest among the streaming companies, and it still went out of business. When you are in a physical record store, you learn from the room, watching what others buy, conversing with clerks, reading short reviews, listening to what’s playing and asking about it. Other Music was a valuable one-room schoolhouse, as record-learning goes. Up until Tower Records closed down, whenever I went back to New York to attend a Bang on a Can festival or interview a musician, or meet with record labels, Other Music was always a stop. It felt a bit like cheating to walk across the street from Tower, but the cheating was always in service of the magazines’ coverage.