This thread is extracted from a conversation yesterday on the recently launched Disquiet Junto discussion Slack — that is, on the slack.com platform (if you’re interested in joining in, send me an email at [email protected]). The subject of “randomness” or “chance” in music was brought up by J. Siemasko (aka Schemawound), and then fleshed out in conversation between Joe McMahon, Ian Joyce, Anatol Locker, Robert M. Thomas (aka Dizzy Banjo), and others. And then Mark Lentczner said he had a story about John Cage he wanted to share.

Around 7:30pm Lentczner (aka mtnviewmark on the Junto Slack) did exactly that, recounting an encounter with Cage at Harvard where Lentczner studied with Ivan Tcherepnin. The above photo (from tcherepnin.com) shows Tcherepnin, right, and his two sons, on the left, with Cage. The photo below (from harvard.edu) shows the Harvard Electronic Music Studio from that era. This is Lentczner’s story about Cage visiting a music class he was attending (“in the early 1980s”), along with some interstitial comments from other Junto Slack members. 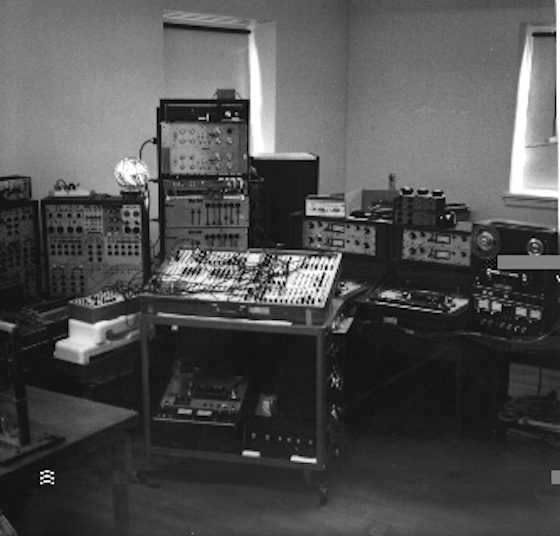 mtnviewmark [7:33 PM]
Randomness is the topic of the day

SO – Once, a long time ago, in a land before MIDI, I studied electronic music.

If you don’t know this piece, it involves taking a square piece of paper with splattered ink drops on it, and overlaying it with five pieces of acetate, on each of which is a single line. The idea is the dots represent musical events. You then overly the first acetate sheet, and measure the distance from each dot to the line- the closer it is the sooner in the piece the note occurs, the further, the later. Then you repeat with the second line, only here distance from the line gives the pitch of the event. Third is volume, fourth is duration, and fifth gives timbre.

So essentially you generate a random collection of musical events (perhaps notes), from this very random process… and then you play it. On whatever instrument(s) you want.

So – every year the dozen students in the course would do this. Some would tape splice carefully. Others would turn knobs on the modular synth to match events. And so on… And it was always interesting the day the assignments were played where we’d listen to these dozen realizations of a “random” piece.

[Strikes me like Cage was writing us a Junto…. eh?]

After having done this myself, my first year. In a subsequent year (I was at this point not in the class, just studying 1-on-1 with Ivan), I decided that I would “get at the heart of this piece” by ”‹automating the randomness”‹: I programmed an Apple ][ (pre-Mac, folks!), to make the spatters, draw the lines, do the measurements, assemble the notes, play the tones (covering occurance, pitch, duration, and volume), and output CV to a modular synth (for timbre), which processed the whole output.

Essentially, you hit play, and…. it’d played a 90 second ”‹Variation I”‹ realization. Press it again, and you got another.

It so happened this year that we were to be treated to a very special experience: A week or two after the class did ”‹Variations I”‹, Ivan arranged for John Cage to come visit and talk with the class.

Over the course of the afternoon, Cage talked with us, and listened to us – and at some point the class played their ”‹Variations I”‹ realizations and there was wonderful discussion.

But then…. Ivan had also arranged that after the class was over, Cage would spend an hour or so with just me, in the small side studio I now used for my computer and synth work.

Of course, I was brimming to tell him, and play him, my automatic ”‹Variations I”‹ program. I explained how it worked, what it did… and how I loved that “by listening to variation after variation, as the randomness played out across the space, eventually the listener would come to hear the ”‹essence”‹ of the piece, the ”‹composition would show through”‹ the randomness.”

To me, this was obviously wonderful – indeed a key to randomness in music: We want to add variation, with some degree of unpredictability, to elicit a kind of feeling in the music – whether it is just tiny sample & hold added to our percussion patches to make the drums sound less mechanical, or it is random melodies choosen by Markov chain – this is a kind of controlled-unpredictable algorithmic composition.

Ahhhhh…. and I had done it for this great work, ”‹Variations I”‹ by the great master, John Cage.

mtnviewmark [7:54 PM]
Cage listened, and in his incredibly thoughtful, quiet tone, being the great teacher who doesn’t aim to teach, but is just before their students….

mtnviewmark [7:54 PM]
…pointed out that I had completely missed the point of the piece, and my realization was just wrong.

For ”‹his”‹ aim, in employing randomness, was not to employ a controlled chaos in service to his composition. But to get away from it ”‹being his composition”‹. To remove his ego from his composition as much as possible [his direct phrasing].

He did not want a different set of random notes on each repetition. He wanted exactly the set of notes the randomness determined when the performer prepared the work. He wanted the audience to listen to ”‹that”‹ exact musical line. To hear it, for what ”‹it”‹ is, not for what ”‹he”‹ composed.

natetrier [7:58 PM]
So the preparation was crucial, in his perception. Almost like a ritual. Interesting.

mtnviewmark [7:58 PM]
Yes – and needed so that it wasn’t ”‹him”‹ we were all applauding at the end. But the experience.

I can’t begin to tell you how profound this hour with Cage was for me.

For not only did I now begin to understand what his work was truely about.

But I began to think about what was my work about, for me, what was I doing, and why.

And it was an incredible expansion of my understanding of what it could mean to make music.

I hope the story helps bring that expansion in some small way to you.

mtnviewmark [8:04 PM]
Most welcome! So glad to have finally found a community, lo these many years out of college, who are into thinking so much about music. Thank you again, @marc.weidenbaum!

qdot [8:04 PM]
And I mean, I consider you energetic /now/. I can’t imagine back then, as opposed to quiet, reserved Cage. :slightlysmilingface:

marc.weidenbaum [8:04 PM]
I have to ask, did he inquire at all about the effort you put into your realization, the employment of that early Apple?

mtnviewmark [8:05 PM]
He was quite interested in the means of preparation, he was genuinely interested in any means to make music.

We also talked about some of my other algorithmic works and I played some for him – I think he liked using anything to come to music.

leerosevere [8:11 PM]
Great story! It reminds me of his love of employing the I Ching method for composing almost anything. I would love to read a book of personal Cage stories.

mtnviewmark [8:12 PM]
I was using Forth on an Apple ][, after meeting with David Behrman in NYC (his loft studio was like a wonderland to me at the time – to be living in a warehouse loft in NYC surrounded by analog music devices all day…..) I’m pretty sure that Cage knew of Behrman’s work at the time.

Dave Wilson had built for me this giant interface board for the Apple ][ – something like 16 CVs out, 8 CVs in, and I think 12 triggers in each direction

it was a monster – but it enabled us to interconnect the Apple ][ to the Serge Modular .

mtnviewmark [8:17 PM]
But I admit the impact of that discussion, and implications for my philosophy of music, overshadowed anything else we talked about.

mtnviewmark [8:27 PM]
@leerosevere: I had found a book on the I Ching as an 11 year old in the bottom of a box of contents from a county auction. Dutifully cut yarrow stalks and followed it. Imagine my surprise in college discovering musical works made with it!

jicamasalad [11:08 PM]
@mtnviewmark: Thanks for sharing that beautifully Cage-ian episode – I can’t begin to imagine what a treasured experience that must be for you. I’ll throw in my (second-hand) Cage moment because it speaks to the same heart of his art: A good friend worked on the union stage crew at UC Berkeley’s Zellerbach Hall in the early 1990’s; there was to be a performance by Merce Cunningham’s group with a new work by Cage employing something along the lines of 50 or so loudspeakers on the stage. My friend, being well aware of Cage’s music and methods, wanted to make sure everything was set up just right, and summoned the courage to approach the master as the speakers were being brought in. “Excuse me, Mr. Cage,”he said, “do you have a stage plan, layout or instructions for how these 50 speakers should be set up for the performance?” JC turned with his characteristic kind and open smile and said: “It makes absolutely no difference whatsoever.” !! I think of that nearly every time I get myself stuck on some detail or other”¦.