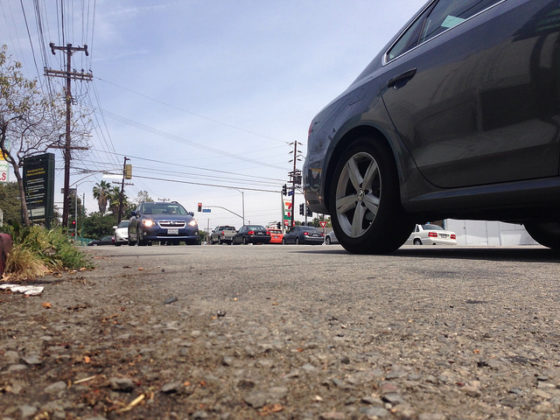 There was a car idling as I walked to the bus from my house yesterday morning. Its engine was a rough, asthmatic purr. There was another car idling when I got off the bus. There was one idling when I grabbed a pupusa lunch to take to a friend’s apartment, and another when I stood waiting at the corner for the bus. I had second thoughts about the bus, because two conversations were scheduled in the next hour on my way downtown, and it felt rude to talk on the phone on the bus. Instead I used an app on my phone to engage a ride-share service. Soon enough the ride-share car arrived; it idled as I approached and got in.

When I got out of the car, two conversations later, another car near-silently passed by: a hybrid. At the corner, when I began to walk across the street, an electric car executing a turn came to a halt. Its wheels made a sound against the asphalt, quite exactly the sound of a large piece of rubber being abused, but the breaks were indiscernible, and the engine entirely absent, especially against the noise of downtown midday.

A sizable majority of ride-share vehicles, seemingly regardless of app affiliation, run on internal combustion engines, and the sound of their idling is something of a sonic signature of ride-sharing. Certainly there are HEV ride-sharing drivers, but those seem — to this pedestrian and habitual bus-rider — to be a small percentage of the overall makeshift fleet. The hybrid and electric cars represent one significant shift in vehicular technology, and the idle — as a sonic symbol of ride-sharing — represents another, and these two shifts seem to have little in common, to even be at cross-purposes. I’d like to see statistics about car models in ride-sharing and how they correlate with general consumer car use. One transportation revolution is signaled in silence, while another lingers on the street, awaiting a passenger, engine gently rumbling.

This morning the news was awash with stories about a ride-sharing service preparing in the very near future, later this month, to offer a self-driving car service — a third potential technological shift — in a major American city. Meanwhile, the ride-share driver waits for a fare to arrive, and the car’s idling seems like more than simply a sonic signature of a category of service; the idling seems to signal a lack of awareness of this third major vehicular shift, a threat to the driver’s economic well-being, that may occur down the road.

(Photo by Mack Reed, used via Flickr and a Creative Commons license.)