[Yeah, spoilers. Boilerplate, polite version: I promise I don’t “spoil” anything that would have bothered me had I known about it in advance. That said, I cannot think of anything I have read or watched in my life that would have been spoiled had I known the plot-advancing facts. And this is not, I promise, a brief Cliffs Notes”“style detailed summary of the story. Perhaps the only real way to “spoil” something is to detail any serious flaws in logic, to the extent that you then can’t get them out of your head. I can’t promise that I don’t to that — but neither can anyone else.] 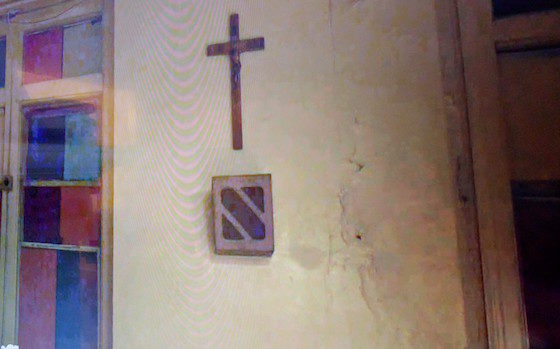 In the director’s commentary to the American remake of The Girl with the Dragon Tattoo, David Fincher, a master of pixel-specific art direction, talks about the chance intrusion of a halo into a frame. There’s a scene in his film that takes place at a computer repair place. MacJesus, it’s called, in lieu of an actual Genius Bar. In the scene, a fluorescent light in the shape of a circle hovers above the head of our hero, the antisocial hacker Lisbeth Salander.

In the commentary he notes that contrary to appearances, this wasn’t planned. The production team didn’t realize how symbolic that lighting was going to appear until after the shoot was done. It seems like a rare instance of unplanned scenery for Fincher, who famously uses CGI to correct real-life settings to match his design expectations.

The TV series Mr. Robot owes much to Fincher, and not just how the plotting of the first season shares certain parallels to Fight Club, which like The Girl with the Dragon Tattoo is in part about outsiders wreaking havoc on the establishment. The parallel isn’t just character and plotting. The direction of Mr. Robot has a strong, exacting design sensibility — individuals framed in lower corners, rooms like stage sets, adherence to symmetry, an overarching hyperreality — that echoes Fincher’s aesthetic perfectionism. In the hands of the show’s creator, Sam Esmail, Mr. Robot aspires to the smudgier, dustier, dirtiest aspects of Fincher’s vision, and also has time, thanks to corporate-tower machinations, for Fincher’s more clinical tendencies, too.

This week’s episode, “eps2.5_h4ndshake.sme,” the 7th of the 12-part season, featured a significant revelation about the show’s setting. This revelation occurred after a group therapy session that the show’s protagonist, Elliot, has been participating in all season. We already know that the character played by Christian Slater (in a role that I like to think of as a spiritual descendent of his pop-anarchist character in the 1990 movie Pump Up the Volume) is in fact a mental image of Elliot’s deceased father — that Slater’s character is, quite literally, all in Elliot’s head. A side note: Like Mr. Robot, Pump Up the Volume was filled with as much prerecorded music as it was with a proper score, and the score to Pump Up the Volume was by Cliff Martinez, whose ambient approach to underscoring is now a veritable norm in the entertainment industry, and it’s a style employed artfully in Mr. Robot by Mac Quayle.

The woman who leads the therapy session tells Elliot late in the episode that she’s seen Elliot “talking to him.” Elliot thinks the woman means his father, but of course she doesn’t mean “him”; she means “Him.” She’s referring to Jesus; the group therapy sessions occur in a large room with a cross on the wall. She then leaves Elliot so he can have some private time in the sanctuary, and the cross comes into focus, with a sad little old-fashioned speaker directly below it. This placement is unlikely a chance occurrence, like the halo was in The Girl with the Dragon Tattoo. The visual formulation — the cross and the speaker together, as if they are collectively one totemic object, an image of the source of voices that it can be said people hear in their heads — is almost too perfect, but almost too perfect is the nature of Mr. Robot.